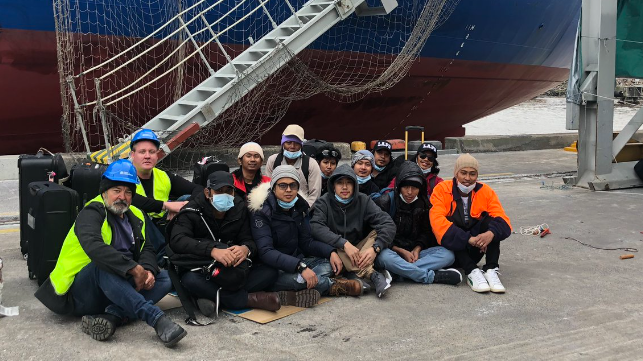 Vatican denounces governments and operators for inaction on seafarers’ rights


The Vatican has once again weighed on the well-being of seafarers by calling for respect for their safety, their labor rights and their human rights.

In a message ahead of Sea Sunday on July 11, the Vatican accused governments, shipping companies, crew agencies and international organizations of perpetuating or burying their heads in the sand as sailors suffer in due to the disruption related to the COVID-19 pandemic and their safety. is endangered by hackers.

“We call on shipowners, management companies, agents and recruiters to see crew members as more than ‘work force’ and to remember that they are human beings. We urge the development of working practices based on human dignity rather than profit, and thus provide all that is necessary to improve the mental, physical and spiritual well-being of seafarers, ”said Cardinal Peter KA Turkson, Head of the Vatican Dicastery for the Promotion of Integral Human Development.

While COVID-19 has caused significant disruption, the global response to the plight of seafarers has been largely discriminatory and isolationist, which has exacerbated the adverse effects on their well-being, according to the Vatican.

In particular, despite repeated calls from international organizations, unions, shipowners and faith groups for seafarers to be recognized as “essential workers” so that crew changes are speeded up and vaccinations are given priority , few countries have facilitated movements and implemented a seafarer vaccination policy.

“Due to this pandemic, we would like to invite the maritime industry to learn to act as a whole by facilitating crew changes and vaccinations and strengthening the implementation of international standards to improve and protect human and professional rights. seafarers, ”Cardinal Turkson noted.

The Vatican’s hard-hitting message for Sea Sunday comes as the global maritime community grapples with sensitive issues affecting seafarers, including vaccination, crew change, labor rights, safety at sea, between other.

Just this week, the Indian Maritime Association of Shipowners, Managers and Agents accused a section of hospitals across the country of denying sailors COVID-19 vaccines.

According to the Vatican, the shipping industry which transports 90 percent of cargo has worked to keep global trade flowing by transporting goods, including drugs and medical equipment. However, it cost the 1.7 million sailors dearly, some of whom had to endure hardships brought on by the COVID-19 disruption, some even choosing to kill themselves.

It was estimated that as of September 2020, some 400,000 sailors who should have been repatriated were in fact stranded at sea due to COVID-19. In some cases, sailors have not been able to return home for 18 months.

Besides COVID-19, piracy is another major challenge for sailors, with 38 piracy incidents reported this year. This includes 33 ships boarded, two attempted attacks, two ships fired on and one hijacked ship.

To face the scourge of piracy, the Vatican calls on governments and international organizations to find lasting solutions. “In addition, shipowners should adopt all the necessary preventive measures to ensure the safety not only of ships and their cargo, but above all that of seafarers,” Cardinal Turkson observed.

The Vatican has also called for an end to abandonment of ships, demanding the full implementation of new obligations under the Maritime Labor Convention (MLC 2006) adopted in 2014 and entered into force in 2017.

Under the convention, shipowners are required to have compulsory insurance to cover abandonment at sea, to pay for expenses such as food, drinking water, medical care and repatriation costs.

There has been a significant increase in ship abandonments from 40 in 2019 to 85 in 2020, according to the International Federation of Transport Workers.

next test for the global supply chain crisis