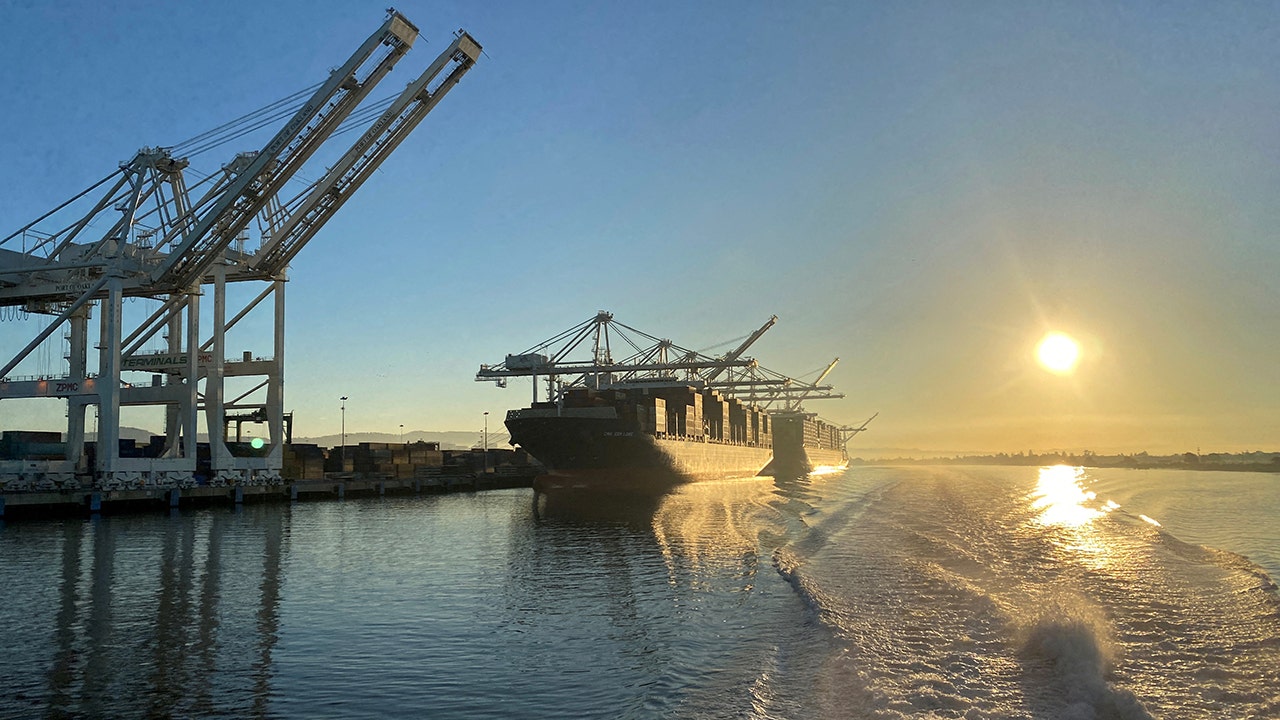 the we The Department of Agriculture said on Sunday it would help fund a new container yard for agricultural exports at California’s port of Oakland, as government, ports and food companies scramble to ease shipping delays. expensive shipping.

The multimillion-dollar project is set to open in March, and officials said it could be replicated elsewhere.

Strong US demand for goods from Asia during the pandemic has boosted imports, clogging West Coast ports. Some ocean-going vessels have left the United States with empty containers after making deliveries, rather than waiting to fill ships with American cargo for export.

Ships delivering goods to the ports of Los Angeles and Long Beach, Calif., also skipped Oakland, a major hub for agricultural exports, to head back to Asia more quickly.

FILE PHOTO: The sun rises past cranes and a container ship at the Port of Oakland, California, U.S., November 3, 2021. REUTERS/Ann Saphir (Reuters pictures)

Oakland’s export volume in 2021 was down 8% from a year earlier, the port said, hurting shipments of products like nuts, dairy and fresh produce.

“With the delays and disruptions that are happening, market share is at risk,” U.S. Agriculture Secretary Tom Vilsack told Reuters.

The Port of Oakland will open a 25-acre “pop-up site” to provide space to prepare empty containers, the USDA said. The off-terminal site will move containers out of the chassis and store them for quick pick-up, the port said.

U.S. Secretary of Transportation Pete Buttigieg said in a statement that “inland pop-up ports” have improved cargo flow at the Port of Savannah and that the government plans to work with other ports on similar ways to reduce congestion.

The USDA will pay 60% of start-up costs and partner with the Port of Oakland to partially cover a $125 per container refund made to shippers, Vilsack said. The USDA estimated the project would cost about $5 million, and the port said initial start-up would cost about $2 million.

Although U.S. agricultural exports hit a record high in 2021, they could have been bigger without delays at ports, Vilsack said.

GET FOX BUSINESS ON THE ROAD BY CLICKING HERE

In the first nine months of 2021, shipping disruptions cost the U.S. dairy industry an estimated $1.3 billion due to lost business and higher shipping and storage costs, said Jaime Castaneda, executive vice president of the US Dairy Export Council and the National Milk Producers Federation.

Some importers canceled orders due to delays, forcing U.S. producers to resell their goods at a discount, Castaneda said.

FILE PHOTO: The city of San Francisco is seen as shipping containers are unloaded from ships at a container terminal at the Port of Oakland, California, U.S., October 28, 2021. REUTERS/Carlos Barria (Reuters pictures)

Those delays contributed to a 57% increase in the company’s supply chain costs last year, Durkin said. Costs are expected to rise another 50% in 2022, with a third of the increase related to exports, he said.

GET FOX BUSINESS ON THE ROAD BY CLICKING HERE

To deal with port delays, Leprino Foods trucked dairy products normally exported from Oakland to Houston and other ports, Durkin said. It also sent whey products by air to a customer in Asia who needed them to maintain operations, he said.

Durkin and the dairy groups are working with the USDA, ports and shipping companies to improve exports.

“We have to solve this problem one way or another,” Durkin said. “The challenge is huge.”

The storm washes away the memories of a ship