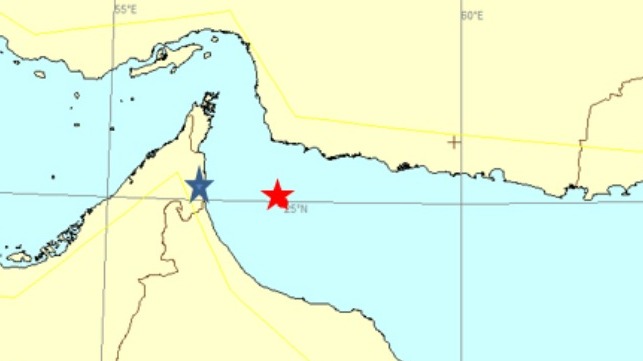 UK warns of potential Iranian hijacking of tanker off Oman

In a situation still ongoing and closely watched by the international community, UK authorities are warning of a potential attack and hijacking of a vessel in the Gulf of Oman some 60 miles east of the city of Fujairah in the United Arab Emirates. Conflicting reports began to emerge after the British warning with authorities saying the attack was being investigated as an assault by Iran or Iranian-backed militias, while Iranian authorities have quickly dismissed the reports and said they were ready to offer assistance to any vessel in distress.

UK Maritime Commercial Operations (UKMTO) sent out a brief warning warning vessels operating in the area. They called the incident a potential hijacking and not an act of piracy. They first said they had received reports from an unidentified third party and would investigate and then upgraded their reports to make it a potential hijack.

Both Dryad Global and Aurora International safety consulting services later identified the vessel as an asphalt tanker, the 9,748 dwt. Asphalt Princess. The ship was believed to be en route between the United Arab Emirates and Oman. The vessel is registered in Panama and operated by a Dubai-based company called Prime Tankers. The same company had an incident in 2019 with Iran which was accused of hijacking another of its ships while Iranian authorities said they were towing a broken down vessel to port.

The latest AIS data and reports for the region place the Asphalt Princess still near the center of the Gulf of Oman almost stopped. The BBC cites sources with unconfirmed reports that the ship was ordered to sail to Iran after being boarded by eight or nine gunmen.

Aurora International and other sources, however, continue to report that the ship remains in the Gulf of Oman with the Royal Air Force of Oman presumably flying over the situation. British and American forces in the region are also reportedly monitoring. Ned Price, spokesperson for the US State Department, said in a regular briefing today, “We are aware of reports of a maritime incident in the Gulf of Oman. We are concerned. We are looking at it. “

Earlier today, various unconfirmed reports said five or six tankers in the area had all reported they were experiencing navigation issues. This has led to speculation on everything, including a possible cyberattack on ships in the area, although later reports indicated that at least two of the ships were on their way again.

The Times of London reported that British authorities “were working under the assumption that the Iranian military or proxies were to board the ship.” Iran’s foreign ministry quickly refuted the reports, calling them suspicious and unfounded accusations. Iranian authorities continue to accuse Western powers of “creating a false atmosphere” while also denying previous reports that Iran was responsible for the attack on a Japanese tanker run by an Israeli company last week that killed two people, the captain and a security guard on board the ship.

The captain of the tanker was a Romanian national, which led the country to issue statements denouncing Iran. The Tehran regime responded by summoning the Romanian ambassador to demand the retraction of false information. The US Navy escorted the tanker after what was believed to be a drone attack to a safe anchorage where the investigation is ongoing.

Both US and UK government officials have blamed Iran for the previous attacks and increased tensions in the region. They called for a coordinated international response to Iranian aggression in the region.