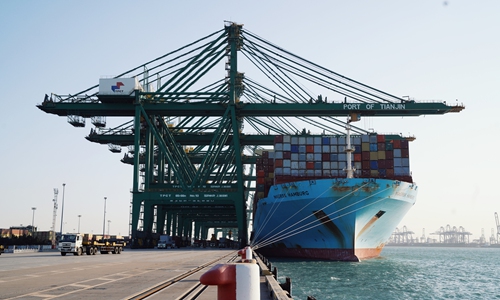 Despite the latest outbreak of Omicron variant in Tianjin Municipality in northern China, Tianjin Port has achieved a new world record for berthing time efficiency among the three Mediterranean lines belonging to the main alliance international shipping – 2M Alliance, the Tianjin Port Group told the Global Times on Sunday.

According to a statement sent to the Global Times by Tianjin Port Group on Sunday, a Maersk Hamburg container ship left the Tianjin Port Pacific International Container Terminal at 8 p.m. Saturday, 24 hours earlier than the originally scheduled time.

Meanwhile, six broadcast vehicles that will be used during the Beijing 2022 Winter Olympics were successfully unloaded at the port of Tianjin on Sunday, which come from Olympic broadcast services and will be transferred to venues in Zhangjiakou in the Hebei Province and Yanqing County in Beijing.

The Port of Tianjin has observed strict coronavirus prevention and control measures while continuously working to improve the efficiency of the arrival and departure of international container ships.

How the Costa Concordia wreck changed an Italian island

How explosives, a robot and a sled expose an ‘apocalyptic’ glacier – Mother Jones