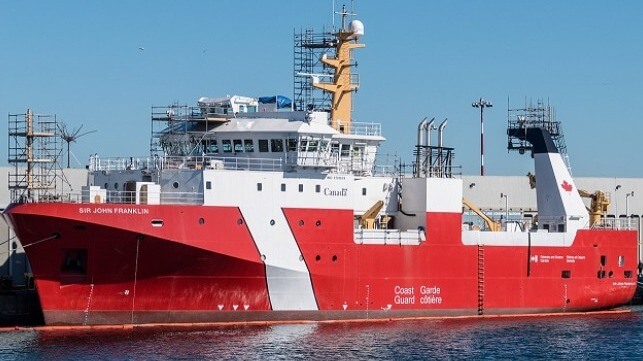 
The Canadian Coast Guard has discovered that its newest series of marine science vessels have a ‘class-wide’ problem with their stern tube bearings failing prematurely, according to CBC, requiring dry-docking and the repair of the three hulls. CCGS Sir John Franklin and CCGS John Cabot have already been refitted, and the CCGS Jacques Cartier is due for a propeller shaft bearing replacement next month.

“As a new vessel enters full operation, there may be issues that need to be resolved and we continue to work closely with our client, ready to provide support and assistance as and when required,” said a spokesperson for the shipbuilder told CBC.

The ships were designed and built under Canada’s National Shipbuilding Strategy (NSCS), and the need for an early refit is the latest in a series of delays, cost overruns and setbacks for the program.

The frigate’s cost estimate has skyrocketed to more than $3 billion per hull, nearly double the price of a larger one. Arleigh Burke-class destroyer, and the price of the next two Arctic Offshore Patrol Vessels for the Canadian Coast Guard has doubled to $600 million each.

The future icebreaker faces two challenges. The cost of each ship in the twin-hull series has risen to nearly $3 billion, about three times the unit cost of the U.S. Coast Guard’s Polar Security Cutter heavy icebreaker program.

Additionally, according to the Ottawa Citizen, the shipbuilder may have difficulty sourcing the LR EH50 specialty high-strength steel specified for the construction of the ships’ hulls. The Canadian Coast Guard listed steel availability high on its list of program concerns in response to questions from the Canadian House of Commons. The structural steel market has been stretched by demand shocks related to the COVID-19 pandemic, and the NYSE Steel Index benchmark price has doubled since 2020.

US Navy ends development of DART sonar with Raytheon