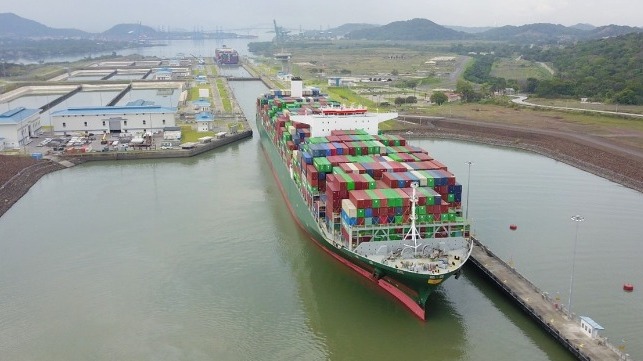 
Ahead of the fifth anniversary of its expansion, the Panama Canal Authority announced that it had increased the maximum length allowed for vessels passing through Neopanamax Locks. This increase comes at a critical time when global supply chains are under strain. This means that almost all (96.8%) of the global container ship fleet can transit through the Panama Canal, shortening routes and benefiting economies around the world.

“This change was made possible by the experience of our team in the safe and reliable operation of the Neopanamax locks over the past five years,” said Ricaurte Vásquez Morales, administrator of the Panama Canal. Since the opening of the new locks to commercial traffic, the Canal Authority has taken progressive measures to increase capacity.

Since May 21, the maximum overall length of commercial and non-commercial vessels acceptable for regular transits through Neopanamax locks has been increased by just over three meters (370.33 against 367.28 meters) or by more than 10 feet (1215 versus 1205 feet).

The increased capacity to accommodate longer ships will provide shipping companies with greater flexibility in making deployment decisions, the Panama Canal said in announcing the new policy. They also believe that it will play a role in the design and construction of ships in the future with greater capacity that can transit through the Panama Canal.

Before officially increasing the length, a series of test transits were undertaken to confirm the safety of operations. They included the 369-meter-long (1,210-foot) Evergreen transit of 2019 Triton, which has become the largest vessel in dimensions and container loading capacity (14,424 TEU) to transit through the Panama Canal since the inauguration of the Neopanamax locks in June 2016. Since then, other vessels of the same dimensions and loading capacity of containers also passed through the waterway. , including the Talos and Theseus, also 14,000 TEU vessels operated by Evergreen.

In addition to this increased overall length, the Panama Canal has also increased the maximum allowable draft to the highest level allowed in the canal. The canal added an additional foot, now licensed vessel with a draft of up to 15.24 meters (50 feet). Previously, the level had been maintained at 14.93 meters (49 feet). The draft is subject to rainfall levels on the isthmus and the management of Gatun Lake water by the Panama Canal Authority. Last fall, the Panama Canal Authority began soliciting bids from international engineering companies for a comprehensive water management system designed to improve the functioning of the canal and secure the drinking water supply of the country.