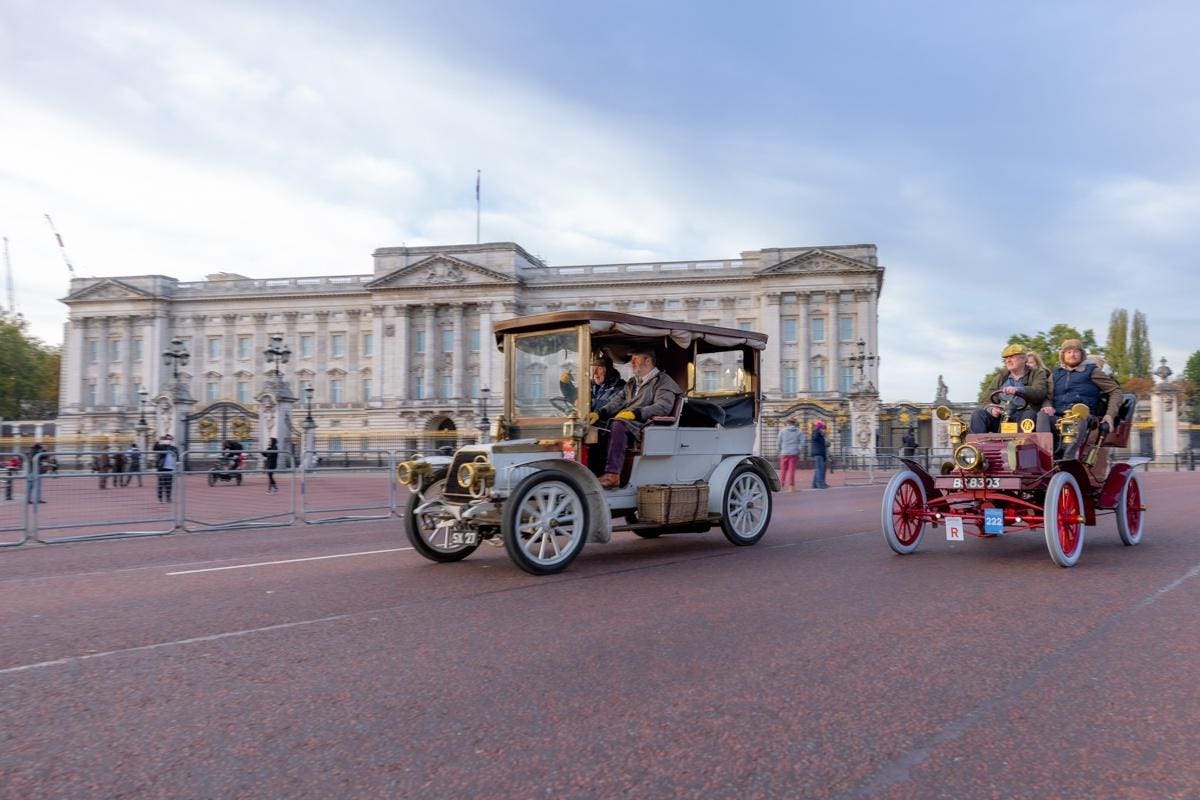 Organized by the Royal Automobile Club and sponsored by RM Sotheby’s, Britain’s Veteran Car Run traveled from London to Brighton earlier this month, marking 125 years of the famous ‘Emancipation Run’ that inspired everything. Today, the race is the biggest and most important event honoring veteran cars in the world.

In 1896, car owners took to the streets to celebrate the passage of the Freeways Locomotives Act of 1896, which incorporated motor vehicles into modern life by increasing speed limits and allowing drivers to move freely on national roads. Although the annual event fizzled out in 1903, the race was relaunched in 1927, persisting to this day with uniquely British enthusiasm and fanfare. Each November, participants gather alongside spectators at Hyde Park in London, which has been the official starting point of the race for almost a century. What is usually a wet and cloudy affair (it’s London, after all), was surprisingly enjoyable this year; the sunny morning gave a warm welcome to those who have been eagerly awaiting the return of the event since 2019. When I got to the start there was already a small crowd buzzing with excited chatter as vehicle owners prepared for their journeys .

It is important to note that although there are a lot of early risers at the starting point, the Veteran Car Run is by no means a race and there is no record of what time each car will be. arrives in Brighton. The purpose of the ride is to display a slice of British history as the vehicles transport you back in time to a time when the British capital still resounded with the sound of hooves on the cobblestones. Public admiration for a 19th-century Cadillac parading in immaculate condition must be akin to the first sensation Londoners had when they watched that same vehicle overtake a horse-drawn carriage. It’s no surprise that many drivers and spectators arrive decked out in late Victorian clothing, adding to the time capsule effect. The race is limited to cars built before 1905, allowing true relics to exist in their element for a day as they complete the sixty mile drive to Brighton. Automakers rationalized technological advancements between 1890 and 1905, which meant that there was a great variety between models from this fifteen year period; the race is one of the few events where you can see steam cars sharing the road with motor cars. Vehicles merge into regular traffic as they exit London, posing unique challenges for drivers. While the sight of antiques alongside commuting sedans is one in a million, veteran cars aren’t always easy to maneuver; sailing modern British roads with over a hundred years under the hood makes sixty miles seem much longer than they actually are.

The day before the main event is usually a plethora of adrenaline-pumping related activities, including the all-new RM Sotheby’s auction in London, the Regent Street Motor Show and an attendee reception. The Regent Street Motor Show attracts local and foreign auto enthusiasts, showcasing not only 19th century models, but also vintage and cutting edge contemporary cars.

The morning festivities on Serpentine Road quickly gave way to the first wave of participants who flew to Brighton, and morale was high. These days the road south of Hyde Park splits in half to avoid unnecessary traffic jams, but turns back to one before the finish line. Cars pass very early at Buckingham Palace and Westminster Abbey, providing great opportunities to take photos that blend the eras.

Mechanical and towing assistance is available en route; most drivers also have ancillary vehicles or small support teams that take an alternate route in case the stars of the show need technical assistance on the fly. While the ride sees mostly classic regulars that fans expect every year, new entrants are always welcome, and this year has been no different. A forest green Haynes Apperson from 1903 turned heads when he first attended the event. The car had been shipped to Europe from the United States, only to end up in the hands of a collector after the transcontinental journey. This year’s lineup included models from well-known 19th century British car manufacturers, as well as renowned French, German and American brands.

As the last of the drivers crossed the start line around 8:00 am, I made my way to Brighton, arriving around the first participating vehicles. Madeira Drive was the perfect beach destination for the sixty mile race; just an hour from the capital, the salty air still seemed withdrawn enough to make the race a ride for every vehicle. Just like in Hyde Park, people gathered at the finish line to greet the early arrivals; although the race was not a race, the fastest drivers still had the chance to rejoice in applause. One by one, classic cars were followed by motorcycles and finally bicycles, also from before 1905. By early afternoon, Madeira Drive turned into a waterfront on the edge of the 20th century, so as the drivers exchanged congratulations and as the spectators admired the cars up close.

Although everyone was technically a winner, friendly competition fueled the atmosphere at the finish line, and it was clear that the race was sorely missed after last year’s unprecedented cancellation. For many vehicles, going sixty miles was nothing short of a miracle.

I left feeling that the Veteran Car Run was, in fact, a veteran event, and given its history, it wasn’t going anywhere anytime soon.

Channel migrant drownings: news and updates live from France and the UK