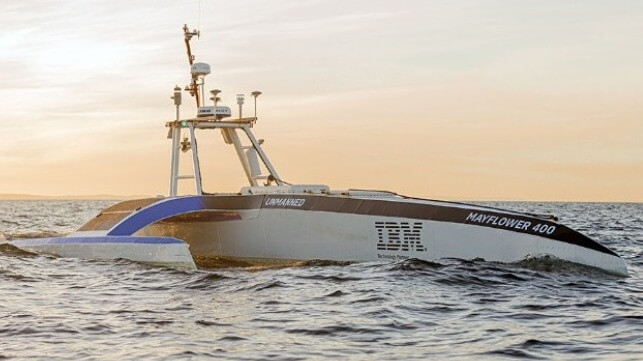 
The autonomous ship Mayflower set off on its second attempt to cross the North Atlantic from the UK to the US using only its AI systems to navigate the more than 3,000 nautical mile journey. Originally planned to coincide with the 400th anniversary of the Pilgrim’s voyage to the new world, the ship was delayed by the pandemic and then mechanical failure on its first attempt in June 2021. If successful, MAS400 will become the largest ship autonomous forever crossed the Atlantic.

Measuring 50 feet long and weighing five tons, the craft was developed at a cost of more than $1 million through a research partnership involving the University of Plymouth, IBM, autonomous ship specialists MSubs and the charity Promare, which promotes marine research. Taking more than four years to develop, the project’s goal is to collect ocean research data during the crossing and demonstrate emerging AI capabilities to steer ships.

The MAS400 is equipped with six AI-powered cameras that provide images to computers that have been educated on land, ships, and other potential obstacles by studying over one million images. The vessel also has 30 onboard sensors and 15 state-of-the-art devices. It transmits trip data to the shore crew via satellite connections which also allow the public to track progress with an online dashboard.


We have set sail and are on our way to the United States!

Led by the AI, Captain MAS 400 is now in international waters as it attempts to cross the Atlantic Ocean. Follow our journey through our dashboard: https://t.co/CKfRoDepmV pic.twitter.com/MXJrfl2qcv


The vessel is currently traveling at speeds of between 5 and 6 knots, reporting that it has covered more than 350 nautical miles since leaving Plymouth on April 27. He provides hourly updates on his automated Twitter account. If all goes according to plan, he should arrive in Virginia in about three weeks. Unlike its namesake, project organizers believe the AI ​​computer will be able to prevent it from veering off course hundreds of miles and arriving in Massachusetts like the Mayflower in 1620.

The team explains that they programmed the system with the planned course and the computers analyze progress by determining how to reach the objective, taking into account weather, currents and other variables, as well as navigating to avoid collisions. The MAS can see approximately 2.5 nautical miles ahead of it and it will identify ships and other hazards in its path. It uses a hybrid wind and solar power system with a diesel backup generator to power the vessel and its propulsion.

First attempt to cross the Atlantic started on June 15, 2021however, the vessel suffered a mechanical failure after completing just over 11% of its journey, the team decided to abort the mission and dispatched a rescue craft to find and recover the MAS400. They reported that a coupling failed on the generator forcing the ship to rely solely on solar power. The team determined that she would run out of energy if allowed to continue the journey.

During the time back at base in England they also used it to improve the craft’s systems. Along with improvements to the mechanical systems to make the craft more robust during traversal, they also improved the computer vision software.

The AI ​​captain reports that all systems are working normally when the Mayflower Autonomous Craft entered international waters. Views were posted of a dolphin swimming alongside as it headed into the English Channel and now the camera shows a gray Atlantic with a long horizon ahead.

Is the United States in a proxy war with Russia? Sergei Lavrov and Lloyd Austin seem to think so.