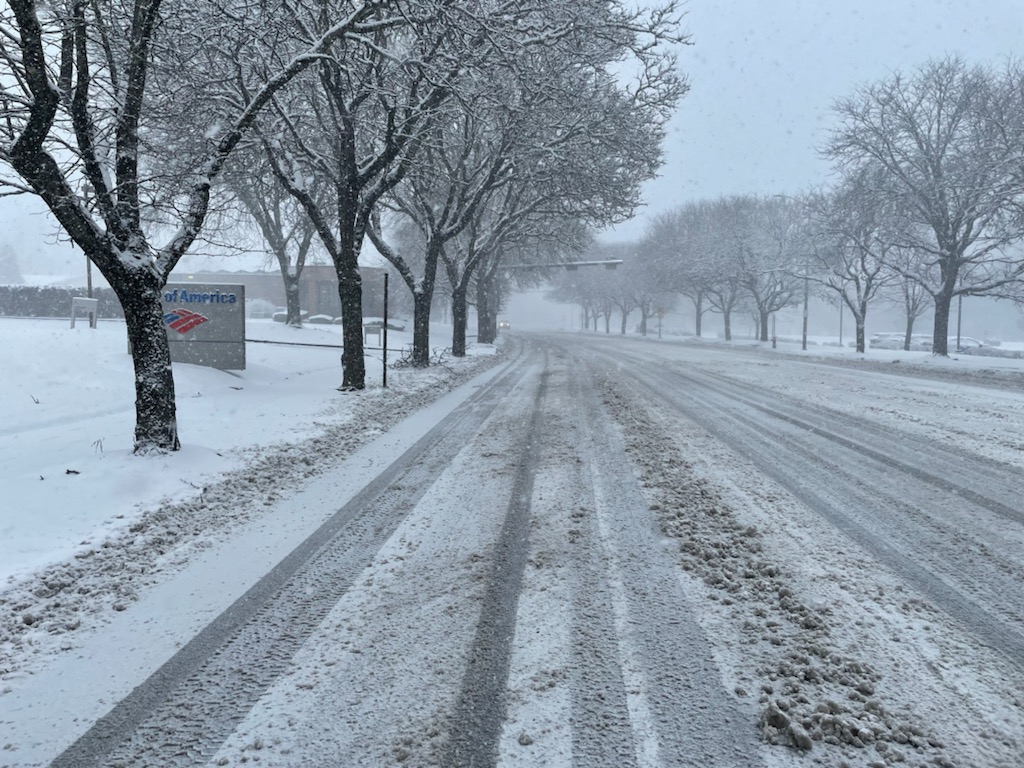 KINGSTON, NY – Just a day after highs hit 50, winter kicked in on Saturday, with 4 to 6 inches of snow falling across much of the Mid-Hudson Valley by evening, according to the National Weather Service in Albany.

As of 4 p.m., the following snow accumulations were reported: five inches at Highland, 4.8 inches at Esopus, with Marbletown and Kerhonkson having four inches each. Catskill was 3.8 inches, New Paltz was 2.8 inches and Rhinebeck was 2.7 inches, while two inches fell to Red Hook. National Weather Service meteorologist Christina Speciale said those amounts were not storm totals and were submitted to the National Weather Service earlier in the day Saturday before the storm left the area.

Cardinal Timothy Dolan canceled his planned visit to Kingston on Saturday to celebrate the 125th anniversary of the Immaculate Conception Church on Delaware Avenue due to snow. The cardinal should reschedule his visit.

“We’re full steam ahead,” Carey said. We shouldn’t have a problem by tomorrow. »

Even as a winter weather advisory that was in effect in the central Hudson Valley throughout Saturday was set to expire at 7 p.m., Speciale urged everyone to stay home if they could. She warned that conditions were expected to remain very treacherous from Saturday evening to early Sunday morning, even after the snow had stopped falling due to high winds, blowing snow and freezing temperatures.

“Wind will drive drift and blowing snow and snow may recover once clear of roads and sidewalks,” Speciale said. “Avoid unnecessary travel.

Parking is prohibited on the snow emergency lanes. For a list of streets, visit https://kingston-ny.gov/snowemergency. Vehicles that do not comply with these parking restrictions will be fined and towed.

The city said it would prioritize emergency snow roads for snow removal throughout the storm.

All parking lots and meters were suspended on Saturday. No permit is required to park on municipal property during snow-related emergencies.

City lots available for parking include three lots on North Front Street, the Forsyth Park lot near the tennis courts, and the Dietz Stadium lot uptown. In the downtown area, land available includes land at the Sea Deli on Broadway, Hodge Center and AME Zion Church on Franklin Street, public land on Cornell Street and Prince Street, the land next to Arace Electronics at 357 Broadway and Broadway Commons at 615 Broadway. Downtown: public lands on Dock Street, 117-165 Abeel St., the Trolley Museum on East Strand; and the Block Park and Kingston Point Beach lots.

Precipitation started as rain but quickly turned to snow on Saturday morning as temperatures dropped into the 20s throughout the day.

Lows are expected to drop back into the mid-teens on Saturday evening with wind chills dropping between zero and 5 degrees, Speciale said.

Central Hudson spokeswoman Dana O’Neill said Saturday the utility has a full complement of crews ready to go. “There are about 100 Central Hudson crews, plus 50 contract crews and that goes with 80 tree trimmers on standby,”

Central Hudson’s Joe Jenkins said Friday there was “a high degree of uncertainty” with the impending storm, but the utility is “looking at these winds carefully.”

Sunday is also expected to be chilly with highs not expected to peak until the mid-30s and winds easing as the day progresses.

But according to National Weather Service meteorologist Joe Villani, good news is on the way for those looking forward to spring, as temperatures are expected to hit 50 degrees by Monday. “People want spring,” he said.

Speciale said the weather pattern for next week also appears to be calm with no major storms expected.

In an emergency, call 911. For a snow-related service request or to report dangerous road conditions during a snow emergency in the City of Kingston, call the Department of Public Works at (845) 338 -2114. If your car has been towed, call the Kingston Police Department at (845) 331-1671.

If you or someone you know does not have a safe place to spend the night, call Family of Woodstock at (845) 338-2370 to discuss emergency service options.

25% of assessed properties in Hawkesbury-Nepean Valley are uninhabitable; 16 Covid deaths