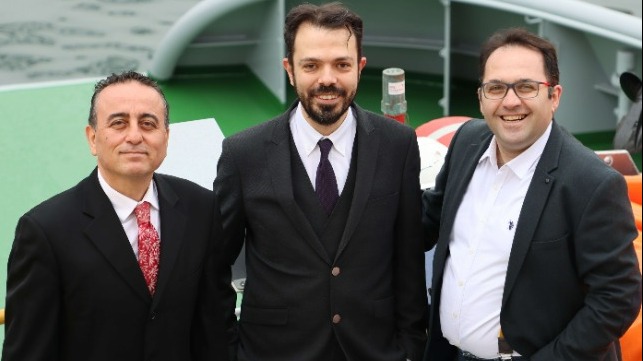 Sanmar Shipyards has appointed three new directors to advance its mission to lead the tug and towing industry towards a sustainable and environmentally friendly future based on low and zero emission tugs.

All three have expertise and hands-on experience with new and developing technologies and alternative fuels that enable this change to happen, and will use this in-depth knowledge to help drive Sanmar’s ambitious plans forward.

The three new directors are Tamer Geçkin, Hakan Tunç and Özer ?lhan, all of whom have been appointed to senior positions within Sanmar. Their appointments, which were made within the past two months, coincide with Sanmar’s acquisition of a third bespoke shipyard which, once operational, will be optimized for the construction of its new Electra series of electric tugs, designed by Robert Allan Ltd.

After earning a BSc in Electrical Engineering from Istanbul Yildiz Technical University in 1997, he worked as a design and field engineer for several years before joining Sanmar as Electrical Systems Manager in 2006, becoming Head of R&D and electrical department in 2011.

He said: “At the moment the best green option for port work is for the tug to be battery powered, charged from shore. This setup works because the operating profile of a harbor tug is predictable and can be calculated from the daily tasks of the operator. We are proud to have introduced five tugs in our portfolio, with different lengths and bollard pulls, which can be powered in this way. »

Tunç, who was promoted from purchasing manager to engineering manager, graduated from Istanbul Technical University’s Faculty of Naval Architecture and Marine Engineering with a master’s degree in business administration. He has worked in tug construction for 17 years and has extensive experience in engineering and strategic sourcing. He joined Sanmar in 2016, working as Project Manager on the S?rap?nar, Delicay and Yenicay series of tugboats, adding Purchasing Manager to his responsibilities in 2017. He is currently the Engineering Manager responsible, with the help of senior management, the planning, supply chain and quality management departments.

He said: “While we are all focused on reducing our carbon footprint, alternative energy sources are always an important topic in our business. The successful implementation of new technology depends on the collaboration of the tug operator, designer, major equipment supplier and builder. These four stakeholders sharing ideas lead to the success of the project.

After working as a naval architect, project co-ordinator and manager for several years, involved in conversions, chemical tankers and fishing vessels, he was first introduced to tugs and leading tug designer Robert Allan Ltd in 2011. Since becoming Design Director of Sanmar Shipyards in 2014, he has enhanced the shipyard’s internal design capability. His team not only updates current designs to meet individual customer needs, but also works closely with Robert Allan Ltd to develop innovative new designs.
aimed at reducing emissions, while maintaining or improving performance and power.

He said: “LNG fuel is suitable for ocean-going vessels or their escort tugs. LNG-powered escort tugs are one of the greenest options today, as we all know that natural gas is the currently available alternative fuel that can be used to reduce emissions. Additionally, LNG fuel is a future-proof solution, as there are many alternative fuels that are not yet commercially available that can use the same structure. »

Seismic ears on the ground