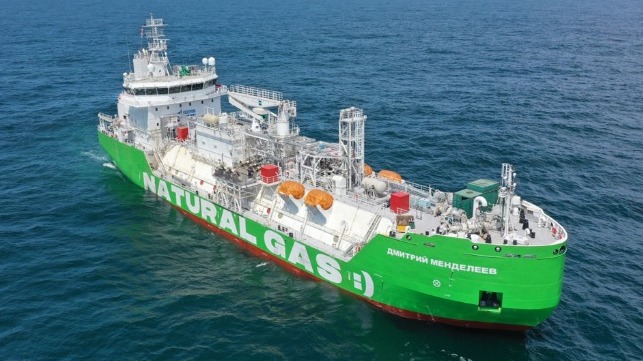 
Construction of Russia’s first LNG bunker continues, with the vessel having recently completed several days of sea trials. To be named, Dmitry Mendeleev, the bunker vessel is currently undergoing tests on its gas loading, storage and transfer systems before it is put into service for Gazprom Neft.

“During the high seas tests, the high technical maneuverability characteristics of the vessel were confirmed, allowing the bunker operator to operate in almost any climatic zone,” said Alexey Medvedev, General Manager of Gazpromneft Marine Bunker. “In the near future, the necessary gas tests will take place, during which specialists will check the gas equipment of the ship. The commissioning of the bunker vessel “Dmitry Mendeleev“Is scheduled for the second half of 2021.”

The vessel, which is built by the Keppel Nantong Shipyard in China, is among the mid-size LNG bunkers. It has a capacity of up to 5800 m³ of liquefied natural gas. The vessel is approximately 328 feet in length and has a width of 62 feet.

Among the design features, the hull is reinforced to comply with the Arc4 ice class. This means that he is allowed to navigate independently in first-year ice up to 0.8 meters thick. It is also equipped with an integrated digital system so that the vessel can be operated by one person from the navigation bridge.

the Dmitry Mendeleev also uses the latest technologies in shipbuilding and LNG transport, as well as taking into account advanced environmental requirements for maritime transport. The ship uses the evaporative gas from the transported cargo as fuel for the power plant. LNG bunkering equipment complies with the international MARPOL convention and is certified according to the ECO-S environmental standard.

Gazprom reported that the vessel was launched at the end of 2020. During sea trials, they carried out a series of tests of the main propulsion systems. The functionality and operating condition of the navigation equipment and control systems were verified, and its maneuverability and speed characteristics were confirmed.

The new vessel will be part of Gazprom Neft’s fleet in the second half of 2021 and will provide LNG bunkering at the Gulf of Finland and Baltic Sea ports between Saint Petersburg, Ust-Luga and Primorsk.

To truly honor fallen service members, we must do more for their loved ones after they leave.