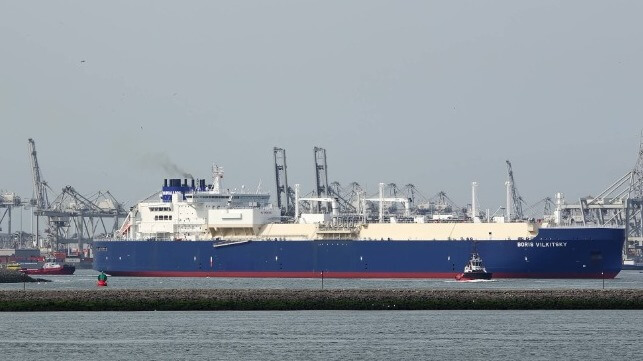 
Dockworkers at several facilities in the UK are refusing to process Russian oil and LNG, prompting several ships to divert or wait alongside. The disruption is part of a growing public backlash against Russian energy shipments following the Kremlin’s decision to invade Ukraine, and widespread recognition that such shipments are a potential means of exerting pressure on Russia. . Taken together, oil, gas and coal account for about two-thirds of Russia’s export economy.

At Birkenhead Docks near Manchester, the German-owned and flagged oil tanker SeaCod encountered an unexpected challenge when terminal workers refused to help unload its cargo of Russian crude oil.

The SeaCod loaded a cargo of oil at the Primorsk terminal outside St Petersburg on February 22 and arrived in Manchester on March 2. Midway through its journey, Russia invaded Ukraine, prompting massive Western sanctions measures and widespread public condemnation.

Several dockers’ unions expressed reluctance to handle Russian cargo due to the ongoing invasion, and the stevedoring crew at Birkenhead Docks shared this view. Although Russian cargoes are not technically banned in the UK – only Russian ships – the crew refused to unload the oil from SeaCod. SeaCod returned to sea on March 6, broadcasting “for orders”. It is not known how much (if any) of her cargo she unloaded before departure, but her AIS broadcast draft was 24ft – far less than her fully loaded draft of 36ft.

Essar Group, the buyer of the cargo, said in a statement that it was working to find non-Russian alternatives. He noted that he had recently turned back two shipments of non-Russian crude carried by Russian-flagged tankers and that the SeaCod had been cleared to arrive by the local port authority.

Russia provides about 30% of Europe’s crude oil supply, and disconnecting from its oil exports is already proving difficult. Last week, Shell bought a shipment of Russian crude oil at a very low price from Trafigura, paying $28.50 a barrel below the market rate – one of the biggest discounts ever. In a statement, the oil major said it had to buy the cargo to ensure adequate supplies, and the superb profitability of the trade will not be cashed in: profits will be donated to charities serving Ukraine.

LNG cargoes from Russia face similar challenges on the waterfront. Boris Vilkitsky departed Yamal LNG the day after the invasion, bound for the LNG terminal on the British Isle of Grain. After union dockworkers at the facility refused to unload Russian LNG, she headed for Montoir-de-Bretagne, France, where she was met by Greenpeace protesters. Activists hailed by Vilkitsky crew on VHF and asked them not to deliver their cargo, as part of the proceeds from the sale will go to the Russian government.


While European politicians, including the French government, condemn Russia’s attack on Ukraine, imports of Russian gas and oil have still not stopped. @TotalEnergies exception does not. #TotalShame pic.twitter.com/JSi44k2naG


Although less often in the spotlight, Russian coal is also encountering a public relations backlash. Germany imports about 20 million tonnes of coal from Russia each year, and it obtains about half of its coal product imports from Russian suppliers. To protest both the use of the coal and the use of the proceeds from its sale, Greenpeace activists in Hamburg met the bulk carrier Grant T upon his arrival from Russia on March 4. They painted the phrase “No Coal, No War” along her hull as she headed for her destination.


20 activists protest against Russian coal imports.
Coal, oil and gas not only fund war, they also drive us deeper into the climate crisis.

Rapid transition from fossil fuels to renewables = better chance of a secure future for all.#fossilfreerevolution pic.twitter.com/9LOTTD8NlC

Seaver: How do we address ongoing supply chain challenges?