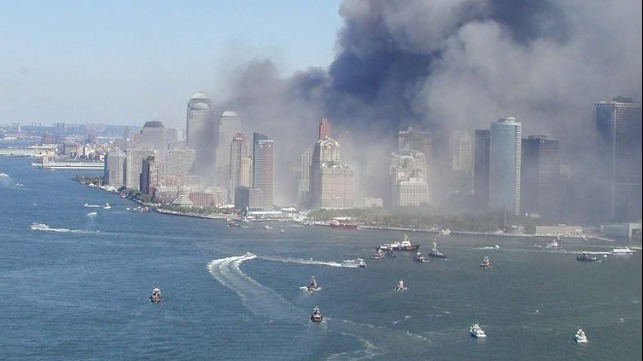 Remembering the heroes of the Lower Manhattan Boatlift

20 years ago this Saturday, hijacked planes struck the World Trade Center in Manhattan and the Pentagon in Washington, killing nearly 3,000 people. A fourth plane would have hit yet another target if the brave passengers on board hadn’t forced it to land on a field in Pennsylvania. The attacks rocked America and set the stage for two decades of war in the Middle East.

At 8:46 a.m. and 9:03 a.m. that fateful day, two Boeing 767s struck the Twin Towers in Lower Manhattan. Following the evacuation orders, the survivors ran down the stairs of the buildings and went out into the streets. At 9:59 a.m., the south tower collapsed and the north tower followed at 10:28 a.m.

As first responders rushed to the scene, Mayor Rudy Giuliani ordered the evacuation of Lower Manhattan and thousands attempted to flee to safety. Many walked to Brooklyn or Midtown, but hundreds of thousands of people were trapped at the water’s edge, cut off by a giant cloud of toxic smoke and dust.

Dan Croce, a former Coast Guard officer, was working in Lower Manhattan that morning. When the second plane hit, he realized that a large number of people would have to be evacuated by water. He called USCG Activities New York and told the Chief Warrant Officer who answered the phone that they would need a boat lift. This is exactly what happened: Under Lt. Mike Day, local Coast Guard units mobilized a force of volunteer sailors to pick up the survivors and transport them across the harbor to safety.

“I looked out the window and saw the pilot boat new York heading towards Upper Bay and the Battery, leading a fleet of tugs and other small boats in what appeared to be a “V” formation. I thought, with tears in my eyes, that they had understood my message and that help was on the way! “Recalls Croce in a recent interview.

This boat lift picked up countless survivors from the waterfront near Wall Street and brought them to safety in New Jersey. The flotilla quickly grew to include five cutters, 12 Coast Guard patrol boats and more than 100 civilian vessels. In total, some 800 sailors saved around 500,000 people from the seafront. It was the largest water evacuation of all time – even larger than the evacuation from Dunkirk during World War II. – and for days afterwards, many of those sailors continued, bringing supplies and fuel to responders at Ground Zero.

To honor their heroism and remember the dead, a group of U.S. maritime organizations held a procession of ships past Lower Manhattan on Friday. The event was hosted by the American Maritime Partnership (AMP), the Navy League, the New York and New Jersey Port Authority, the Sandy Hook Pilots and many more. In the presence of Coast Guard Commander Karl Schultz and Senator Kirsten Gillibrand, dozens of tugs, ferries and other ships joined the procession, including ships that were present on the day of the attacks.

“Within minutes of the call for help, US maritime ships of all shapes and sizes responded selflessly and made sure that the events of that fateful day were not even worse. The American Maritime Partnership remembers and mourns all the Americans lost that day, and expresses its deepest gratitude to the men and women of American Maritime for their selfless response and service, “AMP said in a statement. .

The legacy of 9/11 and the Lower Manhattan boat lift can be seen in dozens of large-scale changes enacted over the past two decades, such as the establishment of the Department of Homeland Security; the early promulgation of the IMO International Code for the Security of Ships and Port Facilities; the launch of US Coast Guard Maritime Safety and Security Teams (MSSTs); and even the design of the ships that serve New York Harbor. The new ferries and pump boats the city has bought over the past decade are being built to handle mass evacuations and onshore firefighting, according to Eastern Shipbuilding Group, the shipyard behind the new Ollis-class of ferries.

On the occasion of the 20th anniversary of the September 11 attacks. we remember and honor the victims – the 2,977 people who died, the 6,000 injured and the thousands of first responders and civilians who suffered the effects of the dust at Ground Zero – but we also celebrate the heroism of the Sailors at their better. Knowing the risks, the men and women of New York’s waterfront have answered the call and saved countless lives.