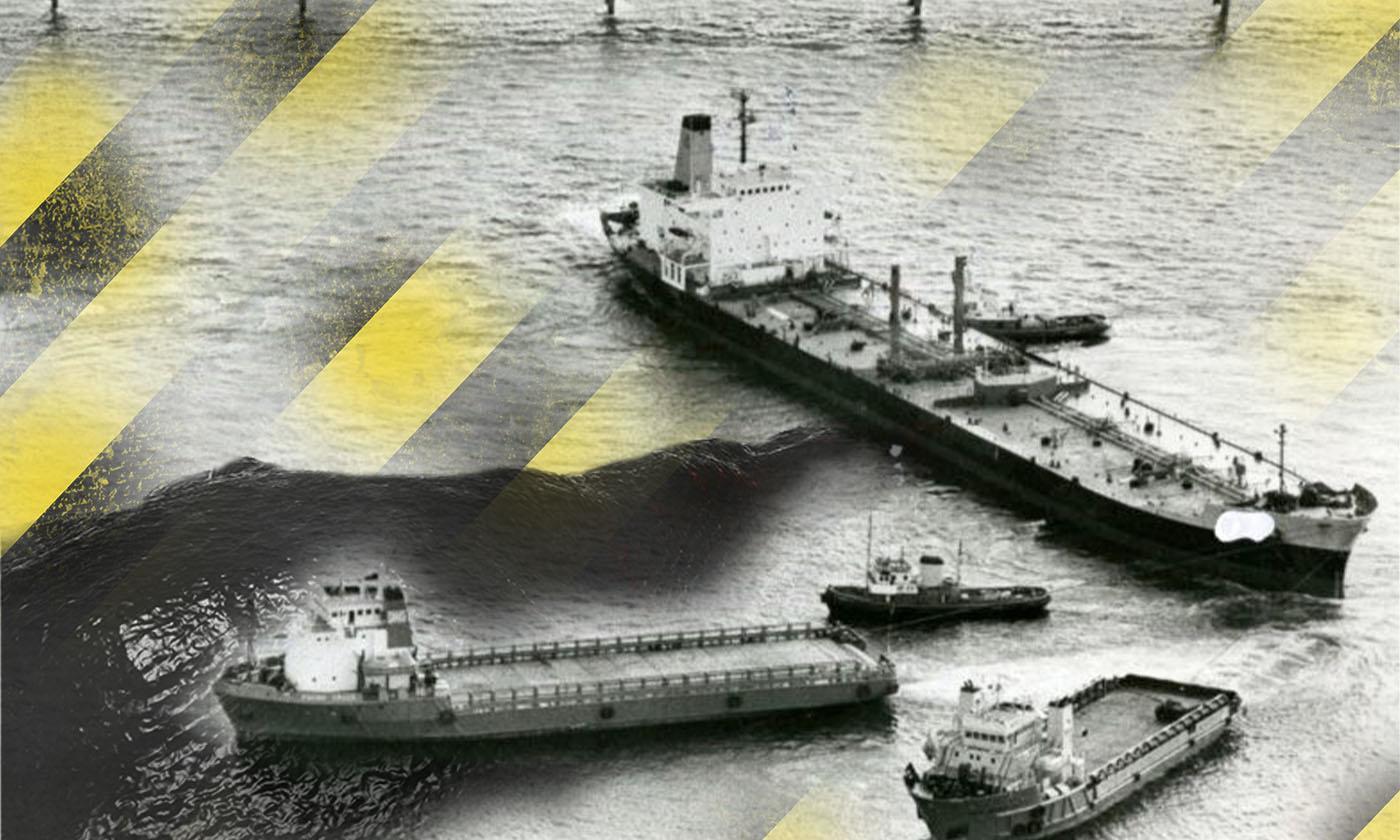 “Fortunately, I’m not prone to nightmares, but it was a day I’ll never forget,” he said.

Its upstream drift was stopped by a sandbar just over 200 meters from the bridge as harbor tugs fought to overpower the helpless vessel.

As the drama unfolded, thousands of people watched from the shore.

Tugs and a trio of oil tankers managed to free the Chelsea before it sent 29,000 tonnes of crude oil spilling into the waters of the Tay.

The 700-foot-long Chelsea, carrying crude oil for the Briggs refinery, was guided down the Tay by a Dundee Port Authority pilot on August 11, 1983.

Due to her deep draft, her mooring was to take place at high tide and two harbor tugs were awaiting her arrival.

The tugs encountered the vessel as it rounded Newcombe buoy, when one moored with its tow line at the starboard bow while the other moored at the port hip.

This was part of the preparations to help rotate the tanker 180 degrees to starboard so that it was again moored out to sea.

Everything went well until the American tanker with a crew of 25 failed to turn and began to drift upstream about half a mile towards the busy highway bridge.

Captain Watson said: “It must have been around 4:15 pm as I watched her pass Prince Charles Quay east of the harbor, washed away with the last of the rising tide, and telling me ‘she should start turning soon’, then to John Fyffe, my assistant, ‘she’s a little late to start her turn!’

“From that moment it became clear that the big bully of a ship had started to turn, but the volume of the last rising tide carried her and her brood of tugs like a baby towards the highway bridge.

“Slowly the Chelsea continued to turn, but its momentum towards the north side of the river and towards the road bridge increased as more power from its engine was used to try to complete the turn.

“At that point, I knew that action had to be taken to mitigate the potential risk of collision with the highway bridge and I ordered its closure with immediate effect.

“At the same time, I asked John and the port control officer to contact three of the oil supply ships in the port – Oil Hustler, Sound Truck and Sea Worker – to stand by to assist Chelsea in when needed. “

Police stopped traffic at both ends of the bridge.

Captain Watson called on the oil supply ships to “proceed in haste” to assist the tanker, who was still in danger of crossing the bridge.

But an unforeseen savior was at hand when the rising tide forced him to run aground by his stern on the sandbank of Beacon Rock.

The road bridge was reopened at 6 p.m. but the danger was far from over.

Then old mother Tay smiled at me!

The five boats now had to work together to pull the Chelsea downstream to the dock in what was a 30-minute window to avoid “unimaginable” damage.

“It was the power of its rising tide, not to mention the other reasons, that caused Chelsea to fail.

“Even with the three mighty oil supply ships attached, there was nothing they could do to free her.

“By radio, I ordered all ships and tugs to shut down engines and be ready for further instructions.

“I remember waiting for the first signs of the ebb tide and when that happened I asked the tankers and tugs to pull downstream with all their might.

“So old mother Tay smiled at me!”

“Its ebb tide started to follow the north side of the river until it fell on the long port side hull of the Chelsea, which obstructed its passage.

“This ebb tide pushed and pushed off the side of this huge vessel and helped the smaller vessels slowly free themselves and moor securely shortly before 8pm.

“Without Old Mother Tay’s help, the result could have been catastrophic!

Captain Watson said the decision to close the highway bridge was the right one, although the Chelsea would likely have run aground again before colliding with them.

“Even so, a risk remained at the time of the decision and if the bridge had been damaged the consequences would have been dire,” he said.

“What has remained unknown to all who witnessed the event and to the general public, except perhaps those with knowledge of hydrography, is that the window of opportunity to refloat the Chelsea was less than 30 minutes.

“When the ebbing tide started to sink, the high water depth around the ship would have remained more or less the same for the first 20 minutes or so, and then its level would have decreased, leaving the ship firmly anchored on the shore of Beacon Rock. and no towing would have moved her.

“The consequence of this is unthinkable! “

What could have happened?

Captain Watson said: “When she dried out, would she have broken her back and sent 29,000 tonnes of Venezuelan crude oil pouring into the waters of the Tay to pollute everything on the way to the ebb on? the two banks of the Tay to the North Sea?

“Then on his return to both banks of the Tay at rising tide to Perth and beyond.

“The spill and the fuel on board would have taken years to recover and the damage (is) unimaginable.

“So what about the wreckage?”

“How long would that have been?”

Professor Rob Duck, emeritus professor of environmental geosciences at the University of Dundee, said there was “no doubt” that an ecological disaster was looming.

“But if you look at the damage caused by the leakage of just 87 tonnes of Venezuelan crude oil from a crack in the hull of Tank Duchess in 1968, which took place while the ship was moored between the highway bridge and Tayport, and over 1,300 birds were killed with associated beach pollution on both sides of the Tay, then high end things, potentially up to a maximum of 29,000 tonnes, so the consequences could have been catastrophic.

“Whether all of the oil escaped is doubtful, but even if a fraction had, it would have been transported and distributed upstream during the flood and downstream during the ebb by the rapid tidal currents of the Tay.

“The consequences are unthinkable.

“The potential loss of all the waders in the Tay and the virtual disappearance of many aquatic species and I doubt the ‘authorities’ could have dealt with such a spill.

“And, had it struck the bridge, the structure could have been severely damaged, potentially causing a long shutdown for repairs.

“The Discovery’s return to Dundee certainly could have been delayed or perhaps not at all if the Tay was still in the cleanup phase, and if it had, it would have been a massive, prolonged and extremely expensive.

“Did the Tay indeed come to his aid that evening?”

The ambitious crossing plan from Dundee to Fife – under the sea

PH-US cooperation is bound to flourish in the years to come: Sent