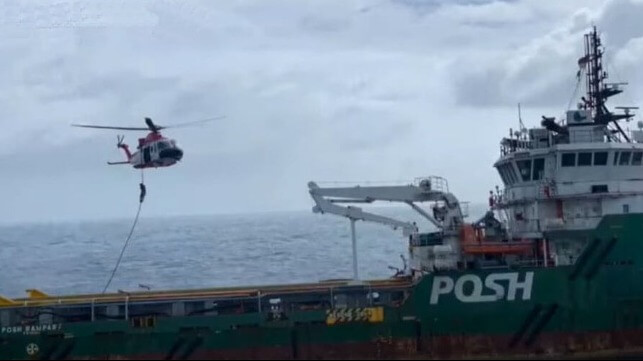 The Malaysian Maritime Enforcement Agency reports that it intervened to prevent a “ghost ship” from colliding with one of the large offshore gas platforms. The agency released video of a helicopter lowering the crew onto the deck of the fleeing abandoned ship to secure a towline to secure the ship to safety.

On January 3, the agency reported receiving a call for help from an Indonesian shipping company saying that one of its ships had lost control of an abandoned offshore vessel it was towing from Indonesia to China. . The tow rope controlling the 2,588 gross tons Bulwark of Winposh had parted from a position about 120 nautical miles from Kuala Terengganu, a town on the eastern coast of Peninsular Malaysia.

They reported that the 236-foot-long vessel had parted in bad weather in Vietnamese waters. the Limin Rosmina, which was towing the abandoned vessel, was unable to control the deep-sea vessel. They reported that it was drifting southwest in Malaysian waters.

The Malaysian Maritime Special Action Team deployed with one of its planes to analyze the situation and identify methods to prevent the ship from drifting. By analyzing the direction of the ship, they determined that it was at risk of colliding with the Petronas Telok A gas platform, an unmanned operation located in the South China Sea, about 125 miles off the coast of Malaysia.

In coordination with Petronas, MMEA was able to locate the fleeing vessel and the video shows personnel descended on the ship’s deck. They were able to secure a tow line to a vessel sent to the scene by Petronas. the Bulwark of Winposh is currently being towed in an operation expected to take up to 65 hours to bring it to the port of Malaysia.

From Squid Game to Supernova: Hoyeon Jung is Vogue’s cover star in February

How can China better save stranded whales?