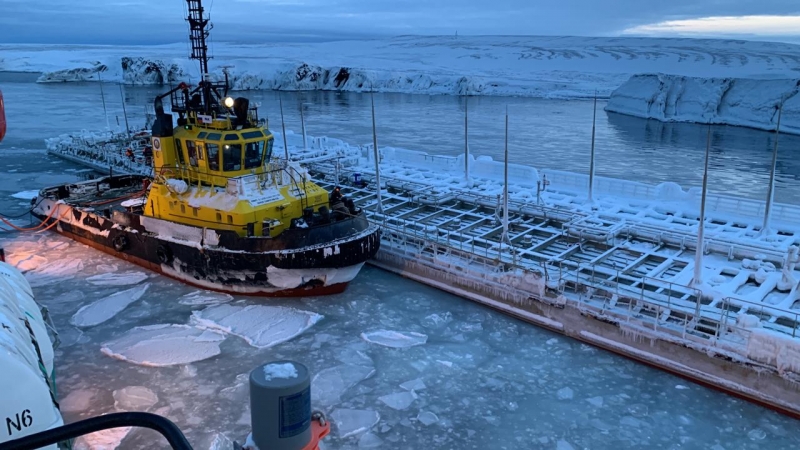 “There was a real threat of an ecological disaster comparable to the emergency near Norilsk”, are the terms used by Rosmorrechflot, the Federal Agency for Maritime and River Transport, to inform about the incident so far not reported with two oil barges that ran aground at the northwest tip of Vaygach Island on November 24 last year.

One of the two huge barges contained 7,000 tons of diesel fuel, while the other was loaded with 170 tons of kerosene (paraffin).

The two barges were towed by the same seagoing tug, the “Packageoperated by Lena River United Shipping Company based in Yakutia.

The destination of the two barges is not disclosed, but fuel oil supplies to remote parts of the Russian Arctic normally take place during autumn with departure ports like Murmansk and Arkhangelsk. Last fall, however, saw a sudden freeze and rapid accumulation of sea ice across the Northern Sea Route, including the Kara Sea.

Vaygach, where the two oil barges ran aground, is the island separating the Novaya Zemlya archipelago from the mainland, best known for the Kara Gate, the western entrance to the Northern Sea Route between Europe and the Asia.

When the distress call was made, the tug with the barges was sailing in stormy winds, waves, drifting ice and polar darkness, informs Rosmorrechflot. The salvage tug »Beisug” was currently in Kara’s doorstep and arrived at the emergency site after just 35 minutes.

Then the two oil barges MN-4001 and MN-4002 were already on the rocks. Two other rescue vessels were sent to the site with additional equipment. Later, a support ship also left Murmansk to join the rescue operation.

Rescuers struggled to break up the ice that had accumulated on the deck of the barges. The ice cover was around 30-50cm thick, according to information released by the Russian Maritime Rescue Service last week.

Two months in the shadows

It is not known why it took almost two months between the accident and the publication of the information. One of the reasons could be that the barges rescued last week have been delivered to the port of Severodvinsk in the White Sea and the danger of any spillage has now passed.

It was the local newspaper Severny Rabotchy which informed about the arrival of the barges in Severodvinsk.

The rescue operation was very difficult and the crew of the salvage vessels worked around the clock to prevent a major oil spill in the fragile Arctic marine environment.

Pulling the barges from the rocks was considered dangerous. This would certainly have resulted in additional and massive damage to the hulls of the barges with a guaranteed spill of petroleum products, the rescue service said.

Work was further complicated by limited depths, windy weather, waves, shifting ice, temperatures as low as minus 20 degrees Celsius and constant icing on the barges. Rescuers had to manually break the ice to gain access to hatches and other structures and to reduce the weight of the barges.

Diving inspections revealed that the ballast tanks of both barges were punctured. Two tank trucks arrived at the site and approximately 5,000 tonnes of diesel fuel were reloaded.

The first barge was removed from the rocks in December, soon followed by the other.

After additional dive inspections, a plan was drawn up on how to tow the barges to a safe port. The towing operation is described as taking place in “extremely difficult ice conditions”, it “repeatedly got stuck” in dense ice, with ice fields in some places up to one meter away. The crew had to quickly battle icing on deck during the towing operation through the eastern part of the Barents Sea and the White Sea to Severodvinsk near Arkhangelsk.

Thanks to the competent and well-coordinated actions of marine rescuers, they managed to prevent an environmental catastrophe in the Russian Arctic zone, the emergency services concluded.

Sigurd Enge, an Arctic shipping and marine environment expert with the Bellona Foundation in Oslo, is deeply concerned about what happened.

“It’s just luck that it didn’t end in a disastrous oil spill,” he said in a phone interview with the Barents Observer.

“This clearly shows that the Northern Sea Route is not ready for year-round sailings. The towing of oil-burning barges seriously jeopardizes the Arctic environment. luck,” said Sigurd Enge.

Enge has first-hand experiences from his youth in arctic waters with shrimp fishing in the northern Barents Sea around the Svalbard archipelago.

“Icing on ships happens very quickly,” he explains. “In the worst conditions, sea spray icing occurs when spray generated by waves of freezing cold comes into contact with any structure on the boat.”

“Seawater can freeze to ice on deck in seconds,” he noted.

In December 2020, the icing would have caused the sinking of the Russian fishing vessel »Onega» near Novaya Zemlya in the eastern Barents Sea. Only two of the 19 crew members were rescued.

“You can’t sail against the wind. This will create even more spray which will freeze on the vessel.

“We at Bellona strongly recommend a ban on towing barges with fuel oil in icy waters, especially during the polar night,” said Sigurd Enge.