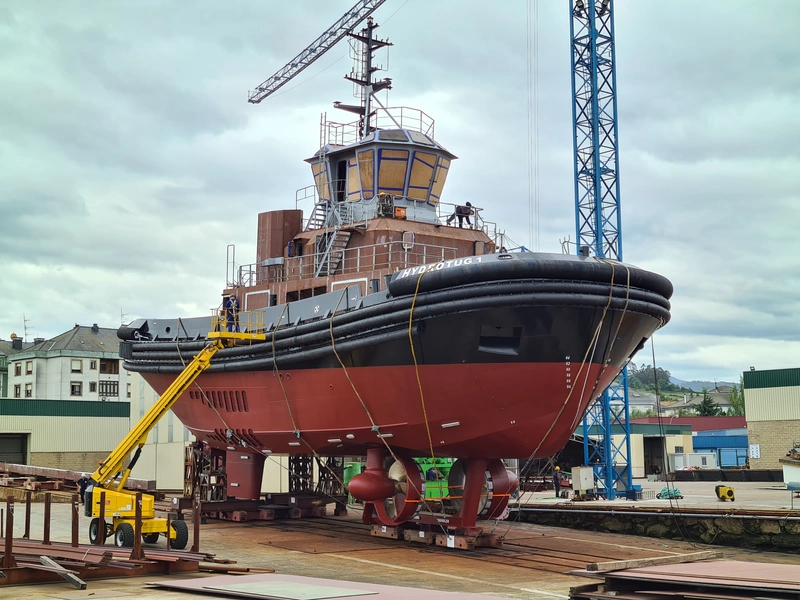 Hydrotug, the world’s first hydrogen-powered tug, has been launched at Armón shipyards in Navia, Spain, marking a key milestone on the road to wider adoption of sustainable, climate-neutral fuel in shipyard applications. work boats.

The remaining fitting out work will be completed over the next few months ahead of sea trials later this year. The revolutionary ship is expected to be delivered by the end of this year and enter full service in the first quarter of 2023 for the transport and logistics group CMB (Compagnie Maritime Belge) in Antwerp.

The Hydrotug consists of two medium-speed dual-fuel BeHydro V12 engines that can run on hydrogen and traditional fuel. The ship can store 415 kg of compressed hydrogen in 6 holds installed on the deck and eliminates the emissions equivalent of 350 cars.

BeHydro, a joint venture between CMB’s cleantech arm CMB.TECH and engine manufacturer Anglo Belgian Corporation (ABC), has recently developed the technology for medium-speed engines with higher power output. The Hydrotug is the first vessel to be powered by these mid-speed dual-fuel engines, each delivering 2 megawatts, with the latest EU Stage V emissions after treatment. The engines have passed the necessary Factory Acceptance Tests (FAT) which validate the correct operation of the equipment, as required by the classification society Lloyd’s Register.

Roy Campe, CTO of CMB.TECH, said: “We are delighted that the port of Antwerp-Bruges is the first user of Hydrotug, the largest hydrogen-powered vessel in the world. The technology has been approved by Lloyd’s Register and we are ready to enter the global 10,000 tug market. With this technology, we can dramatically improve air quality in ports and bring hydrogen technology to every port in the world.

The Hydrotug is part of a program to green the fleet of the port of Antwerp-Bruges, which is moving to a climate-neutral port by 2050.

Deputy mayor for the port, urban planning, land use planning and heritage of the City of Antwerp, president of the board of directors of the port of Antwerp-Bruges – Annick De Ridder, assistant, “The port unified feeds the ambition to become the energy gateway to Europe as a “green port”. An important role in this respect is reserved for hydrogen (green). We therefore welcome such projects. It is innovations such as these that ensure that our port continues to excel as the economic engine of Flanders. We are looking forward to the arrival of the Hydrotug in Antwerp towards the end of the year.

Port of Antwerp-Bruges Operations Manager – Rob Smeets, said: “Recently, the Port of Antwerp merged with the Port of Zeebrugge into one large organization that aims to reconcile people, climate and economy. Our common goal is to become carbon neutral by 2050, through many different sustainability pathways, such as carbon capture and storage, and hydrogen efforts. By 2028, our goal is to have the first green hydrogen molecules on our platforms. In addition, we are studying a hydrogen pipeline between the two ports and towards the European hinterland in order to use as much renewable energy as possible. This hydraulic tug is a fantastic example of what our sustainable future should look like.