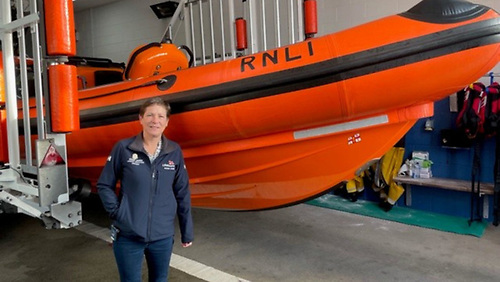 Nine months after serving as the Lifeboat Operations Manager at Kilrush RNLI, Shawna Johnson is preparing for her first Christmas on duty since taking charge of the Co Clare Lifeboat Station.

As the charity launches its Christmas appeal, Shawna – who has volunteered with Kilrush RNLI since 2013 – prepares her crew to trade in their turkey and pudding for the cold waters of the sea if the call for help arrives. .

She urges the public to help her team and the thousands of other volunteer teams carrying pagers over the Christmas season to continue their rescue work.

As LOM, Shawna is responsible for all operational activities at the lifeboat station, including authorizing the launch of the inshore lifeboat and day-to-day management of the station.

â€œI was appointed to this position in April and had to go out with three calls in my first week,â€ Shawna said. â€œFortunately, everything was successful, the crew having towed two boats and their crews to safety and coming to the aid of a kayaker in difficulty.

â€œThis first week was nerve-racking because, while I had been a crew member on the lifeboat, then deputy launching authority, it was the first time that I was the station manager in charge. of everything and everyone. However, once I got the first call I knew I could make it.

Like Shawna, every RNLI crew member is committed to saving everyone from drowning – this has been the association’s mission since 1824.

This Christmas, many will leave loved ones behind to answer the call, each time hoping to reunite another family and see those having trouble on the water come back safe and sound.

Over the past decade, RNLI lifeboats have been launched over 1,200 times during the holiday season. But those rescues wouldn’t be possible without donations from generous RNLI supporters, who help fund the essential kit, training and equipment that lifeboat crews need year round.

Shawna says, â€œThis is my first Christmas on duty as Lifeboat Operations Manager, and I know that even during the holiday season our lifeguards are ready to drop everything anytime and rush to the scene. rescue from someone in trouble on the water. At this time of year the weather can be worse and lives can be at stake.

â€œWe know that every time our crews go out they hope for a good result, but unfortunately that is not always the case. We hope this year’s Christmas call will show people how difficult it can be, but also that with their help we can get much closer to our goal of saving everyone.

To donate to the RNLI Christmas Appeal, visit RNLI.org/Xmas

Could hydrogen airships come back as fast, cheap and environmentally friendly freight transport?