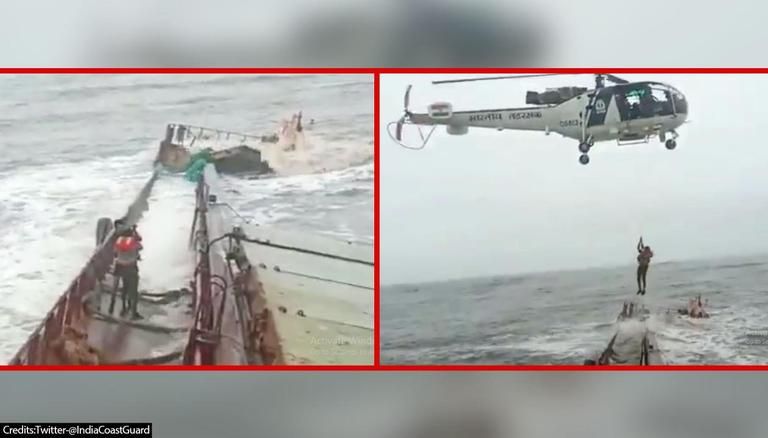 
In a breathtaking sea-air coordinated operation, the Indian Coast Guard (IGC) on Thursday rescued 16 crew members from the MV Mangalam barge which ran aground near the village of Revdanda off Mumbai in a climate tumultuous and rough sea conditions. An ICG spokesperson informed that two ex-Daman Chetak helicopters and the Subhadra Kumari Chauhan ship were deployed by the ICG – which rescued the stranded crew members of the stranded MV Mangalam. All crew members were rescued and are unharmed. Speaking to Twitter, the IGC shared the video of Operation Daredevil.

The 16 crew members rescued from the MV Mangalam barge

After Cyclone Taukate and Yaas, this is yet another operation brought by the Indian Coast Guard. The barge MV Mangalam was at sea when a sudden change in weather conditions was observed and the crew later enlisted the help of the Indian Coast Guard. The ICG acted in time and extended their assistance by sending two Chetak helicopters and the former Daman & Ship Subhadra Kumari Chauhan who rescued the 16 crew members of the barge and transferred them to a safe place.

However, not only in the country, but earlier this month, ICG extended its assistance to the Sri Lankan Navy to reduce fire on the MV X Press Pearl. On May 25, the Indian Coast Guard sent three ships to assist the Sri Lankan Navy in the firefighting operation to extinguish the massive blaze of the Singapore-flagged MV X Press Pearl, which supplies power to serious environmental problems off the coast of Colombo. . Sri Lanka has deployed four tugs in the firefighting operation. The massive fire at the MV X Press Pearl is perceived as the worst marine ecological disaster by Sri Lanka’s leading environmental organization in the history of ecological disasters in the country.