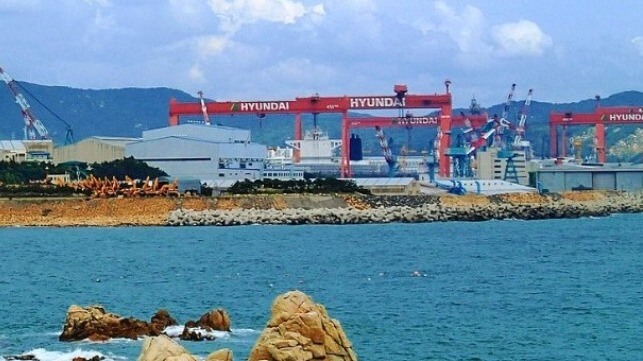 
Rising orders for new builds and a booming order book prompted Hyundai Heavy Industries (HHI) to resume operations at the Gunsan shipyard in the southwestern port city of Gunsan, which was closed in 2017.

At a ceremony attended by President Moon Jae-in on Thursday in Gunsan, North Jeolla Province, South Korea’s largest shipbuilder announced that operations at the Gunsan shipyard will resume in January, five years after the facility closed due to a downturn in the shipbuilding industry. .

During the ceremony, HHI signed agreements with the provincial government of North Jeolla and the city government of Gunsan paving the way for the reopening of the shipyard. “After completing the preparatory work by the end of this year, we will hire 750 workers to produce 100,000 tons of blocks for large container ships per year, starting from 2023,” said Han Young-seuk, CEO. from HHI.

He added that the company intends to inspect the facility and equipment to create a safer workplace.

After investing $1 billion to build Gunsan Shipyard on a 450-acre site in 2010, HHI closed the facility in 2017. At the time of its closure, the shipyard had 650 employees, who were offered voluntary departure. Those who chose to stay were transferred to the company’s Ulsan shipyard.

President Moon said the reopening of the Gunsan shipyard is an important step and part of the Korean government’s plans to boost the growth of the shipbuilding industry by focusing on high-value ships.

“Once Gunsan Shipyard starts producing blocks for LNG and LPG fueled ships, it will further increase our country’s market share in environmentally friendly ship manufacturing, where we have surpassed our competitors,” he said.

He added that South Korea aims to increase its global market share in shipbuilding to 75% by 2030, a goal that will be driven by improving core technologies for low-carbon ships and preparing for the era of zero-carbon ships, including ships powered by hydrogen and ammonia.

The Gunsan Shipyard is expected to play an important role in reviving the economy of North Jeolla Province, as it has the potential to generate $1.6 billion in economic activity when fully operational.