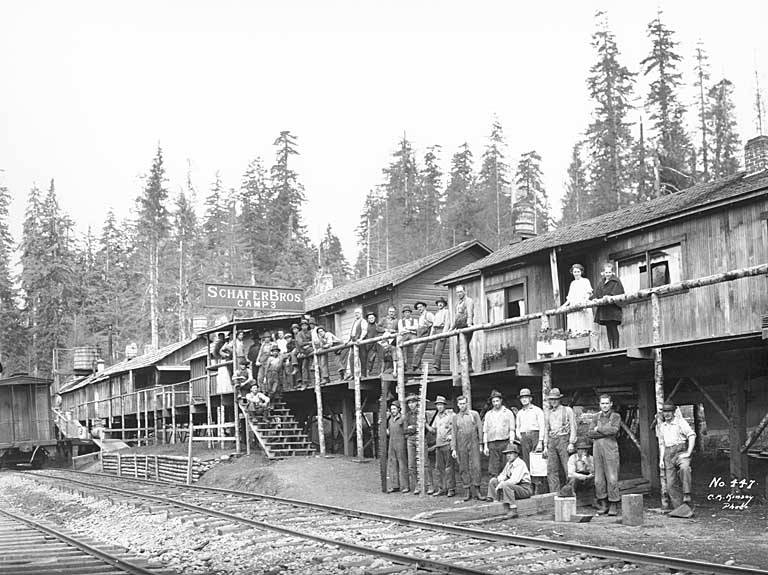 AIn its heyday, the Schafer Brothers Logging Company ran one of the largest logging, milling, and shipping operations in the Pacific Northwest. The company operated a network of dozens of logging camps, a rail network of over 100 miles of track, 18 locomotives, 325 logging wagons, 70 donkey engines, 5 mills, and a fleet of tugs and freighters. Its 3,000 workers came from all over the world.

The Grays Harbor-based logging company was founded by the Schafer family. This family arrived in Olympia in 1871, looking for a new home. John D. and Anna (Bollebeck) Schafer brought their large family to a place along the Satsop River. They chose a farm site six miles from the head of the Satsop River where they established a farm claim and began farming.

In 1893, young brothers John, Herbert and Albert convinced their parents to allow them to operate the family estate. They agreed, and the brothers hired an experienced lumberjack to teach them the trade. Once they cleared their property, their neighbors hired them to clear their land as well.

The Schafer Brothers Logging Company was officially incorporated in 1913 with a capital of $300,000 under the management of John, Herbert and Albert Schafer. The company grew from a team of 20 loggers to using teams of bulls. As technology progressed, the company acquired steam engines for donkeys and later trucks. The company floated logs down the Satsop and Chehalis rivers at high tide to their mills in Montesano and later Aberdeen. The logs were then transported by truck.

The company grew during the First World War. They hired enlisted soldiers as lumberjacks in Spruce Division. Most of these soldiers worked at Camp Five, near the southwest corner of the Mason County line along what is now the Brady-Matlock Highway near Schafer State Park.

The 1920s saw a period of expansion for the company. However, the Great Depression dealt a severe blow to the timber industry. But the company weathered the storm, with demand increasing during World War II. Later, one of the company’s ships, the Maurine, named after Albert’s daughter, rose to fame when it appeared in the 1955 film ‘Sea Chase’, starring John Wayne and Lana Turner. . He had worked the Chehalis River for many years.

Company employees came from many places. A number of the original workers were members of the Satsop tribe. The company operated a network of lumber camps, over 500 over time. While the first team of lumberjacks lived in simple dormitories with an open fire and a hole in the roof for smoke, some later lumber camps resembled small towns with stores, family cabins, and dormitories. Other logging camps were more temporary, with structures built on supports so they could be quickly moved by train or truck to the next logging site. While most early loggers were single, families lived in logging camps in the 1920s.

In 1955, the Schafers sold their business to Simpson Timber Company, ending more than half a century of company operations.

The impact of the Schafer family and their logging business continues to impact Grays Harbor County today. This includes Schafer State Park. Located three miles upriver from Schafer’s original farm, the family had enjoyed picnicking and fishing in the area over the years. The Schafer brothers donated the land to the town of Montesano in honor of their parents. In response, the city accepted the generous donation and opened the park in 1922, but quickly decided it could be better administered through the new state park system. The Schafers deeded the land to the state in 1924. This transaction marked the first time anyone connected with timber interests had donated land to state parks.

Schafer State Park quickly proved to be a popular spot for picnics and outdoor recreation. The Schafer Bros. Employees Association. held annual picnics in the park for workers and their families, often attracting over 6,000 people. These annual picnics featured races and contests, including timber-themed events like high climbing, log rolling, bucking, shingle wrapping, and log inspection. There was even a prize for the bald man with the brightest head!

Schafer Company picnics continued even during the Great Depression and ended when the company was sold in 1955. Video of the 1926 picnic is available on YouTube. The company also produced film footage of their work in “A Story of West Coast Lumber” and “Harbor Plywood”.

Historical artifacts from Schafer’s logging are on display at the Chehalis Valley Historical Museum in Montesano. Some of them came from a now closed museum run by Carl Schafer in the former Schafer Game farm. Traces of the company’s logging trestles, rails and docks are also visible in the area. The Schafer family and their company must certainly be remembered. They have played an important role in the history of Grays Harbor County and its people.