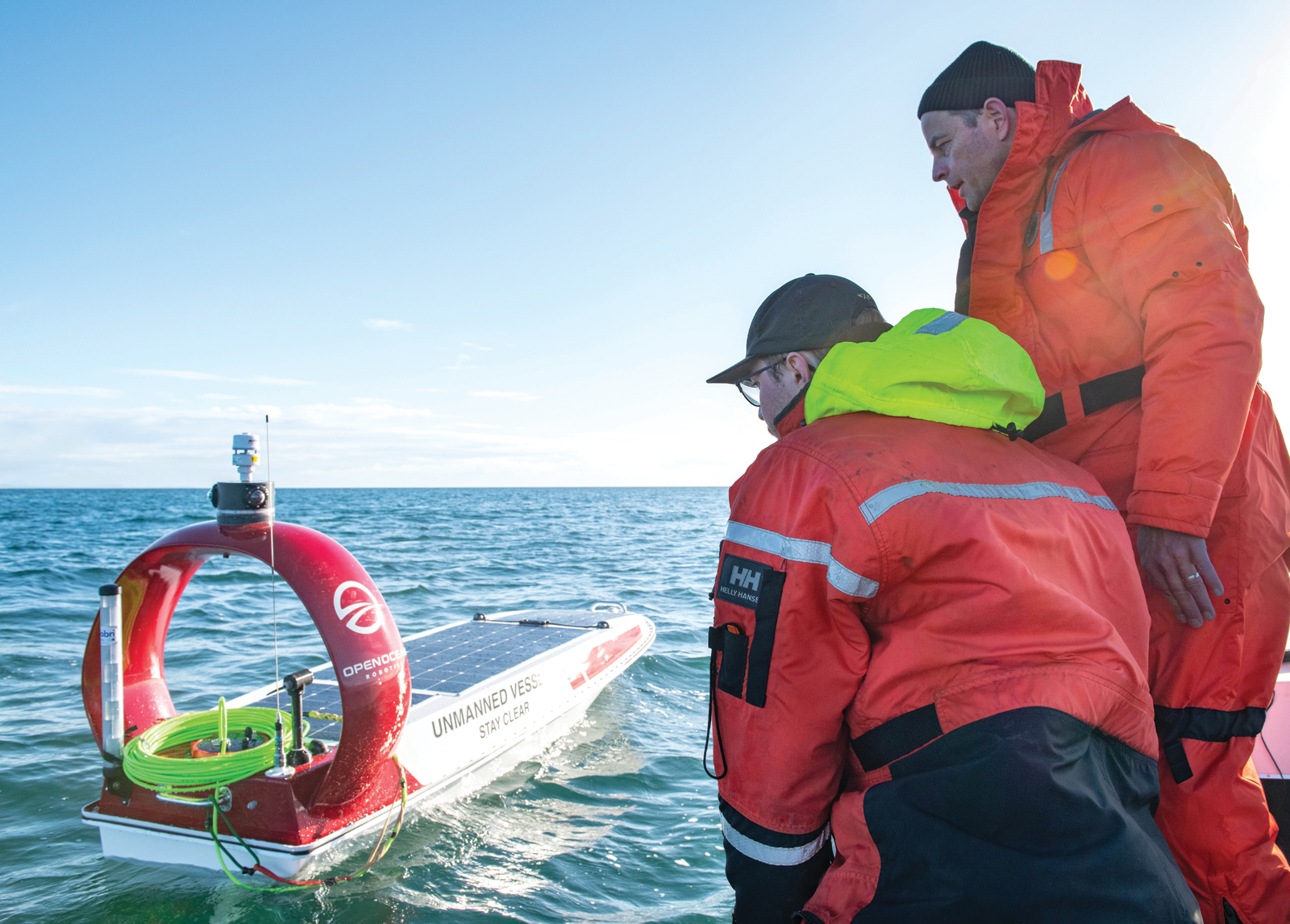 The welfare of marine mammals is at the forefront of recent Defense Research and Development Canada (DRDC) equipment testing.

A team of researchers launched the surfboard-shaped Data Xplorer, a solar-powered ocean drone, over the ocean from Cattle Point in Oak Bay on November 23.

The technology, developed by Victoria-based Open Ocean Robotics, is a safe, environmentally friendly and economical way to collect ocean data.

The goal is to detect marine mammals by towing an array of passive hydrophones and recording or returning data to a command center. If whales are detected, the navy can use the information to suspend, delay or relocate operations to avoid them.

“The best strategy to reduce the risk of damage to marine mammals is avoidance, as well as the development of new automated technology to improve monitoring of marine life,” said Major Dugald Thomson, an officer with the Royal Canadian Air Force currently on secondment to DRDC as their Air Liaison Officer.

The ocean drone spent the day cruising near Chatham Island, Discovery Island, and Trial Island recording underwater sounds. Automated processing in the vehicle detected whines of baleen whales and whistles of Pacific white-sided dolphins; these detections will be checked manually after the test.

Maj Thomson says the Data Xplorer has the potential to deploy at sea prior to military exercises. The Royal Canadian Navy would not own or operate the drone; instead, it would outsource a pre-exercise sweep of a specified area to Open Ocean Robotics.

The potential data the drone can collect is huge, says Ari Robinson, team leader for Open Ocean Robotics. In addition to the passive data from the sonar array, the Data Xplorer has a 360-degree camera; a weather station which collects atmospheric oceanographic information such as wind speed, temperature, barometric pressure; a wave sensor; multibeam echosounder to collect information on the depth and topography of the ocean; and additional sensors that can be equipped.

â€œIt’s satisfying to see something we’ve been working on for so long on water and testing,â€ says Robinson. â€œGetting the Data Xplorer to work with businesses and government sectors, get feedback and really deliver is a pretty cool thing. “

So far, they have built three prototypes capable of transmitting information to their onshore command center via a satellite uplink or cell phone connection.

Open Ocean Robotics works closely with JASCO Applied Sciences to develop autonomous patrol capability. DRDC, meanwhile, is tackling the data problem with a decision support application under development. The application would process and integrate data captured from a multitude of sources, including unmanned platforms such as Data Xplorer, and provide decision support to a ship command team to manage the risks of operations at sea. They plan to prototype the application in-house over the next two years, says Maj Thomson.

“Once we have finished evaluating and developing all of this, we will have a project that we can hand over to the Air Force and Navy so that they can implement it and bring it to market. . “

Before this happens, additional tests on the Data Xplorer must be performed. Phase two trials are scheduled for late February or early March 2022 at the Canadian Forces Marine Experimental Testing Fields in Nanoose Bay.

The protection of marine mammals is part of the federal government’s Oceans Protection Plan (2016). It specifically focuses on three endangered cetacean species – Southern Resident Killer Whales, St.Lawrence Belugas and Right Wales North Atlantic, which can be affected by anthropogenic noise such as surveys. earthquakes or the active use of sonar.

The military is actively working to mitigate their impact on ocean wildlife. The solution is to automate maritime surveillance, says Maj Thomson, and transmit that information to a central location for instant access by the crew of a ship or aircraft.

He hopes the new technology will be a game-changer for military operations.

What it will take to decarbonize maritime transport