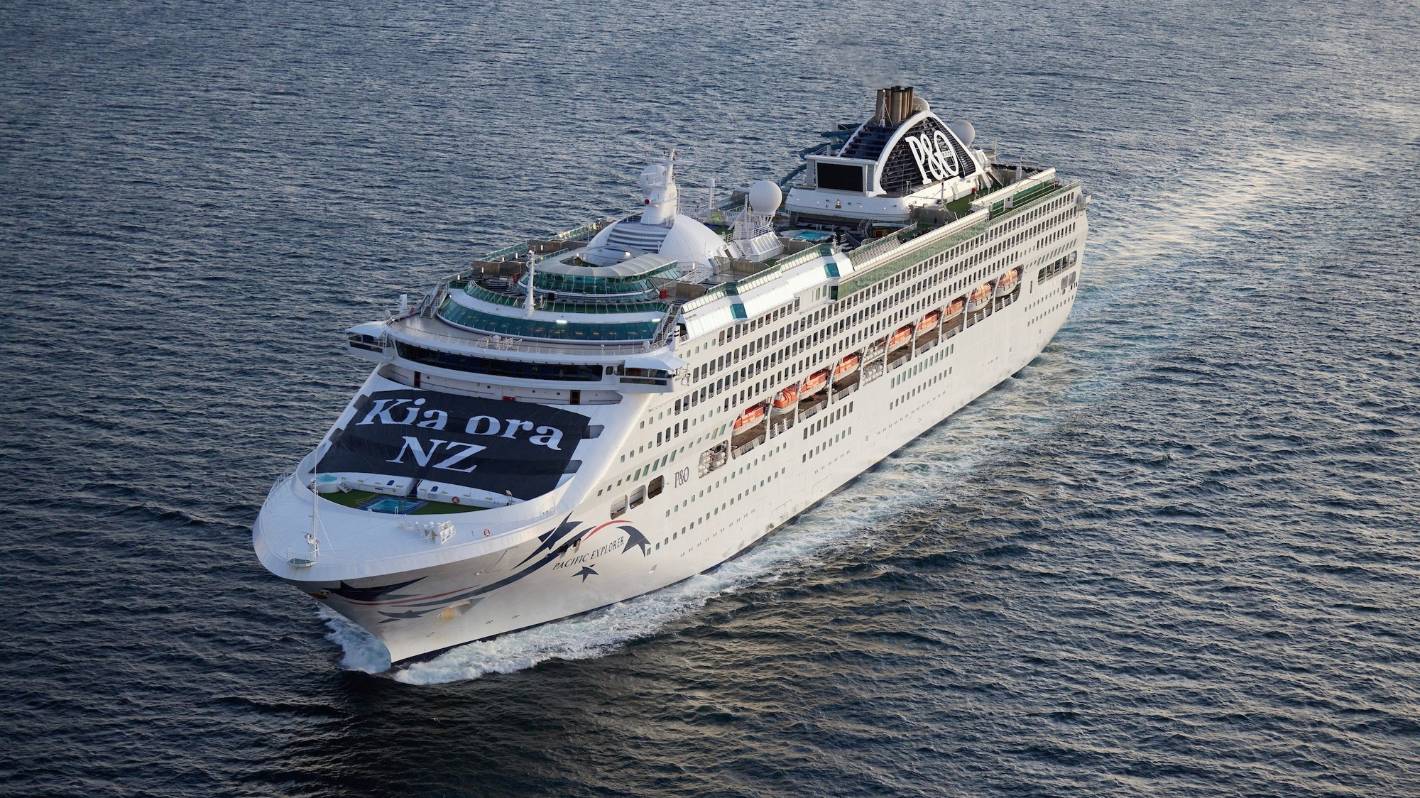 On what was probably the finest morning this winter, P&O’s flagship Pacific Explorer docked in Auckland’s Waitematā Harbor marking the arrival of Aotearoa’s first cruise ship in 880 days.

On Friday, Auckland Mayor Phil Goff, P&O leaders and staff, the New Zealand Cruise Association and the media gathered on the support vessel Peretu, to meet the Pacific Explorer at North Head, before following her in the harbor after her voyage from Sydney.

Before Peretu left, Auckland Mayor Phil Goff said a few words, enjoying “one hell of a ride over the past few years”.

“A fortnight ago we opened the borders, and nearly two and a half years later we welcome the first cruise ship to our city,” Goff said.

Marguerite Fitzgerald, chairman of Carnival Australia and P&O Australia agreed, thanking her staff and the NZ Cruise Association for “keeping the faith”.

“For many of us this will be an emotional moment, I’ve heard many people say before that they’ve taken their tissues off,” she said.

As the cruise ship glided along the glassy sea and into view, New Zealand Cruise Association executive director Debbie Summers was one of those people, acknowledging “so many people” who lost their jobs in due to the pandemic-induced cruise hiatus.

Cheers erupted from the top of the Peretu as the Pacific Explorer closed in, as ‘Sparky’, the new electric tug, doused her with a celebratory water cannon and a rainbow appeared .

Summers said arriving on Friday would be “a litmus test”.

“We’re going to have to see what Auckland can do, at the end of the day, to 1,400 Australians coming off this ship with full wallets and it’ll be good for all of us,” Summers told Stuff.

“It’s been 880 days since New Zealand has had a cruise ship, and I’ve felt every single one of those days.”

Stuff chatted with cruise arrivals from Australia as they exited the ship and entered the city.

Olivia Fletcher and Cooper Boyd soaked up the culture, as a kapa haka group greeted Cloud tourists on Queen’s Wharf.

“It’s really cool to see the culture that they [NZ] have, and finally be on vacation after all this time. Coming to a new country is great,” the young couple said.

‘Big cruisers’ Ginny and Peter said it was ‘fabulous’ to be back in Auckland, while Les Hodge said it was a shame he didn’t spend more time in New Zealand , but would return to visit Wellington and Christchurch later this year.

Mother and son Shona Smart and John Taylor were reunited after five years, after Taylor left New Plymouth to meet his mother on the cruise ship.

“It’s my first time in the big smoke, and I made a big run from Forrest Gump to her for a mommy hug,” Taylor said.

It had previously been suggested that tourists should be warned of the rising crime rate in the city centre, but Auckland’s Central Area Commander Inspector Grae Anderson said that “the return of ships from cruise is on our [police] radar”.

“Police are asking tourists to always be wary of where they venture, especially to unfamiliar places,” Anderson said.

“More people out means more eyes on the street, which means safer streets.”

But what about the environment?

Cruise ships have been heavily criticized for their impact on the environment, dumping toxic waste into our waters, spewing massive amounts of carbon pollutants and killing marine wildlife.

“The air quality on Queen Street in the Waihorotiu Valley had deteriorated year on year until it was disrupted by the pandemic and the closures. Much of this was due to the burning of fossil fuels,” Swarbrick said.

Swarbrick said pedestrianizing Queen Street, which she currently advocates, would “improve air quality and provide a great experience for tourists.”

Cruises accounted for about 1% of global shipping and tended to be at the forefront of new technology adoption, O’Sullivan said.

But what about Covid-19?

P&O and Carnvial, the sister cruise line, have several rules in place to prevent the spread of Covid on board, including negative tests before boarding and a vaccination mandate.

Infectious disease expert Dr Joel Rindelaub implored tourists to wear masks when traveling, and also said they were the “greatest protection” on board.

“Cruise ships should be concerned because the disease can spread quickly – we want to avoid something like the Diamond Princess where around a quarter of passengers have caught Covid-19,” Rindelaub said.

“The best thing you can do is wear a high quality N95 mask indoors, especially in the Auckland CBD area.”

The Pacific Explorer has 999 rooms that can accommodate more than 2,000 people, seven bars and nightclubs, and 18 restaurants and cafes.

The 261m cruise ship is in Auckland for one day only, before heading to Fiji. More cruise ships are expected to visit in the coming months, with the full cruise season beginning in October.