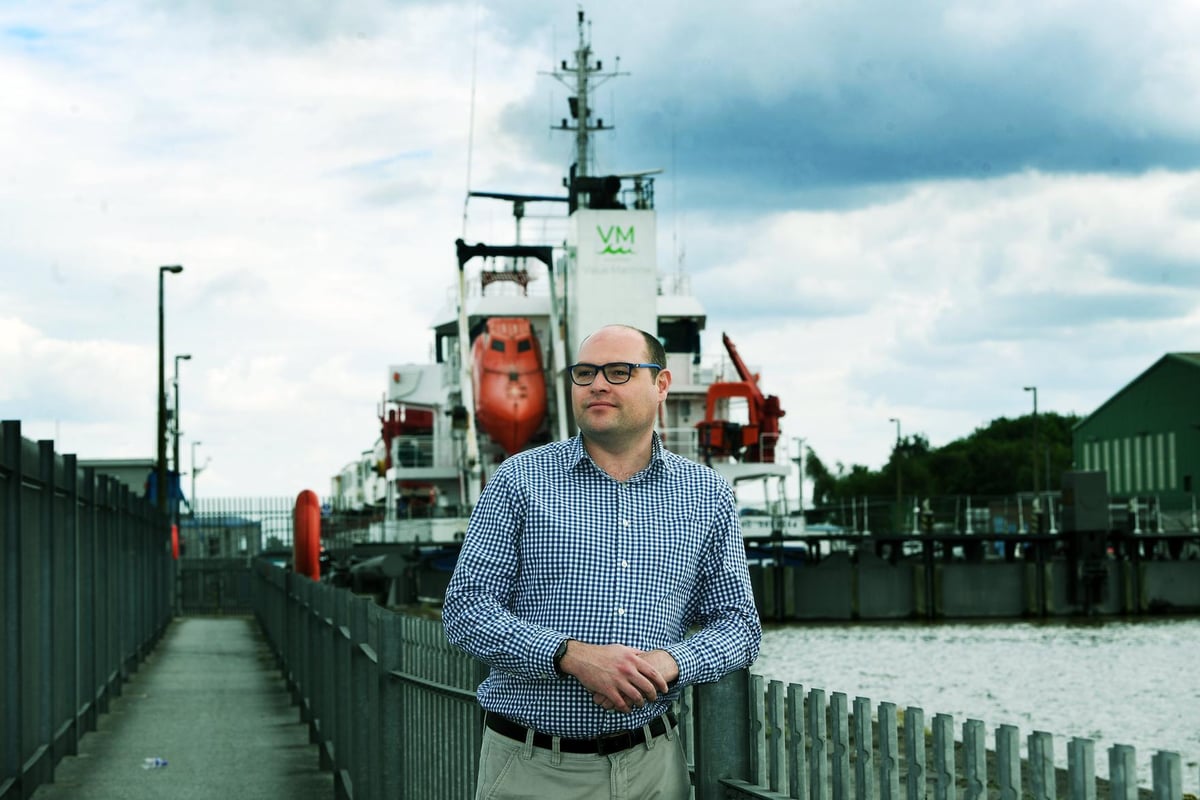 Now some of their memories are being captured for a new digital archive at the Goole Museum called On the Waterfront.

Men like John Branford can remember what the docks looked like in the 1950s when he became captain of a barge at just 15 years old.

Register to our daily newsletter

This was when the Aire and Calder Canal carried millions of tonnes of coal from the Yorkshire mines on board ‘Tom Puddings’, the name given to tub boats on the canal.

The Goole Museum is looking for volunteers to take part in an oral history project called ‘On the Waterfront’ which aims to document working life on and around Gooles Docks. Pictured is the creator of the Goole Museum, Dr Alex Ombler

Mr Branford, 76, one of the few remaining commercial operators, recalls boats towing up to 19 “pans” (compartment boats) of coal.

They were lifted out of the water at Goole and returned in a chute, straight into the hold of seagoing vessels, heading for all parts of the world.

“It was a lot busier,” he says. “There were small ships, mostly English-owned and lots and lots of work. Coal was important at the time.

The docks were “like another small world”, says museum curator Dr Alex Ombler, who realized after recently taking office that the museum had a large collection but no oral histories.

He is now looking for people who have spent part or all of their working lives in or around the port to get in touch to record an interview.

Goole Docks is relatively modern, purpose-built in 1826, unlike the ports of Hull, London and Bristol, which had been established since medieval times.

The big change in modern times was the introduction of containers in the 1960s which profoundly changed the labor market.

Previously, dockers stacked cargo on wooden pallets, which were then hoisted on a sling into the hold where it was neatly wrapped. The work was casual and would be paid by the day. Strikes took place across the country in an attempt to resist the move to containerization, but they came to nothing.

A line of Tom Puddings being towed into the docks Photo: Goole Museum

“The writing was on the wall,” Dr. Ombler said. But because the dockworkers were all registered under the National Dock Labor Scheme, managers couldn’t get rid of them.

“After the 1960s, dockworkers were paid really well – it was a deal to accept containerisation.

Ken Harrison, 82, remembers the docks in the 1960s “when it was very old fashioned and they worked with derricks and cranes. Everything had to be roughed up.”

He remembers the boats that left Goole for ports like Copenhagen, only to return with kegs of butter and slices of bacon.

SOME 50 miles from the North Sea, Goole is the UK’s most inland port.

It processes about 1.5 million tons of products per year – from agricultural products (wheat, barley and fertilizers) to building materials and “liquid bulks”, including vegetable oil.

Unloading bales of cotton from the hold of a ship at Goole Docks 1930 Photo: Goole Museum