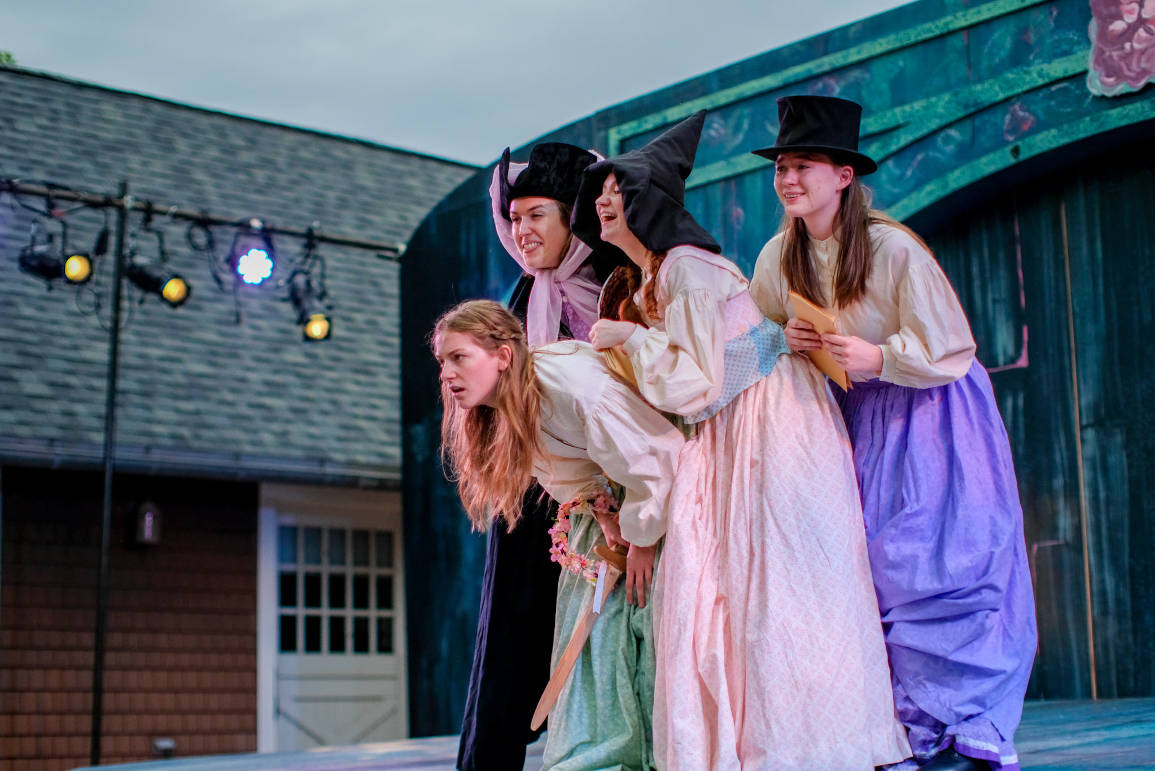 When my table mates and I got to the Cedar Rapids production Little woman at Brucemore, I could feel a coolness in the air. The rainy skies had opened up to let the sun shine just as we rolled down the aisle. The scene, covered with a painted backdrop of the interior of the March House, was almost shaped like a fishbowl lens, as if we were sitting in a mouse hole, watching the warmth of the quaint and worn out house. of the sisters of March. We sat down at our corner table and, after opening our wines, crackers and cheeses, my friends and I felt settled in our collective “safe space”: the theater.

I have to admit that I was nervous about going to my first outdoor theater performance since I was vaccinated. Would I feel safe? Would my body find a little relaxation, to feel comfortable enough to remove my mask and bring into this world that playwright Heather Chrisler, director Saffron Henke and the crew had worked so hard to present? Would I be able to lose myself and my worries, become completely engulfed in the world of the Sisters of March?

Ready for the challenge, the brave sisters of March presented their world, pulling down and letting us into the space, the walls and floor by designer Benjamin Stuben Farrar painted in teal and green, dragging me deeper. in the “scene within a scene” where the young women stood and played. Throughout the show they are pulling hats, canes, capes and playing swords in trunks and closets, game worlds hidden in their house, and show us what four fun sisters with great imaginations and even bigger dreams can pull together. The ensemble of Stuben Farrar had so many surprises in store for us. I was delighted with each new wardrobe and wardrobe unveiled, each an adventure, filled with inspiration.

We meet the stomping and jumping Jo, played by the fiery Mackenzie Elsbecker. His energy on stage is palpable. Dressed in green, her heavy skirts move quickly as she transforms into the fearsome pirate “Captain Bartholomew” – she points her “sword” at her sisters, who take up their own “weapons” as an epic sea battle unfolds. then. The girls and the public are fascinated by this horrible monster of joy that Jo manifests. Jo has one goal in life: to be a great writer. Elsbecker shines the most when she shows Jo’s freedom and bravado.

The world is loud, playful, and fierce, but in the Pirate Battle Beth, graciously played by Noel VanDenBosch, watches over her fallen “pirate” sisters, even though she may be the winner of game fights. In her blue skirts, never the babysitter, Beth would never want to hurt her beloved sisters. This detail was sweet and formative of the Beth that I would see all night long.

Amy de Lily Gast, March’s younger sister, is precocious and strives to be a ‘real lady’, correcting even her more brash sister Jo for not saying slang like ‘jolly’ or ‘blast’, – but showing his youth by saying “it’s practically unbearable” by deploring the war that their father went to fight. The playwright is adept at painting a picture of Amy – the artist herself – as the most dreamy sister, the most captivated by the beauty of the world, or what she perceives to be. Amy’s perception is expressed in rose-colored glasses, as are her peach-pink skirts. Lily Gast has a transformative power on stage. She moves between her characters with full engagement, easily picking up character accents and arcs. As Amy ages and grows wiser, Gast makes a visible change in Amy. You see her corsets tightening her stature (although the actresses weren’t corsetted in costume, which is some pretty impressive movement work, emboldened, I’m sure, by assistant director / movement coach Megan Robinson) as ‘she ages and gains years of life experiences shifting from a scene.

Costume designer Joni Sackett’s work is stunning, especially Amy’s Parisian dress. I am transported in time, and I appreciate the care given to the pieces: gloves, hats and heavy skirts, each one reinforcing the story. In an ice skating scene, the stripes of the shoes on the sidewalk mimic the sound of skates on an icy lake. I can almost see their faces red from the winter cold.

Practical sister Meg, in purple, is purposeful and motivated. Erin Grams plays March’s older sister with the confidence and timelessness of a woman on the verge of a life changing. When the sisters recite letters to their Marme (mother), navigating married life and what it means to be a wife, we see Meg’s urgency and feel that stressful bubbling over and the literal ‘spinning’ emotional roller coaster that it does. may be. Also giving the writer and director their due credit, Grams shows that surface tension – trying to save face in turmoil, which pushes and pulls within itself like Meg fléle – with a masterful performance. The scene is fantastic, a literal circus act, making the audience thrilled with anticipation to see what will happen next. When things literally got out of hand, Grams encountered every obstacle and carried on.

Continuing this story, familiar but presented in a totally new way, we are faced with some pretty incredible character changes. After the departure of sweet Beth with her doll (who is almost a fifth actor in the series), VanDenBosch returns as the gallant and gallant Theodore “Laurie” Laurence. After an impossible quick change, VanDenBosch brings a whole new energy to the scene as Laurie, masculine and cheeky. Laurie is beloved by all the sisters in March, as her attention shifts from sister to sister, depending on the circumstances of life. VanDenBosch is sexy and charming in the role of Laurie, a stark difference from her portrayal of Beth, which pulls your heart out in a different way. Both characters are shown with grace and honesty. There’s a transition I can’t stop thinking about, where Beth’s doll sits in Beth’s place, which is so quick and beautiful. Some of the heavier subjects are presented effortlessly with the help of simple props: a doll, embroidery hoops, the imaginary world of the sisters of March comes through.

As the audience sees the traumas that unfold in the sisters’ lives, the grief can be devastating at times. The safe mars house appears empty. When the sisters all leave Beth, we feel her struggle with loneliness and we wish they could all be together again, supporting each other. We are tied up as an audience, blowing wildly in the wind, like balloons that magically float through the air on the stage as the sisters grow further and further away.

When they get together for happy times, like Meg’s wedding, she asks for hugs saying she “wants a lot of wrinkles like this in her dress” and I remember the hugs I had the pleasure of. to receive lately, after so long. As Jo realizes that her tales of adventures and whims aren’t the only beauty that needs to be recorded for an audience, I remember life isn’t good sometimes. Reality is messy, life is devastating and vile at times, but it is alive.

After dark and the show was over, Brucemore was buzzing with the sounds of the trees and the lake. The audience was buzzing with collective joy and reverence. The sisters remind us that helping and understanding each other is the only way to get through difficult times in life. I have a lot of soft cuddly rustles in my dress. Cedar Rapids Theater production of Little woman brought an old story to life and reintroduced the theater as a safe space to contain all emotions: seeing love and conflict, delicious and raw.

Cedar Rapids Theater production of Little woman runs until June 6. TCR added performance, but it continues to sell out quickly. Tickets are $ 25 for individual seats, $ 100 for a table of four.

Thoughts? Advice? A nice photo of a dog? Share them with LV »[email protected]

Memorial Day: Southern Californians should flock to beaches for vacation as authorities step up patrols