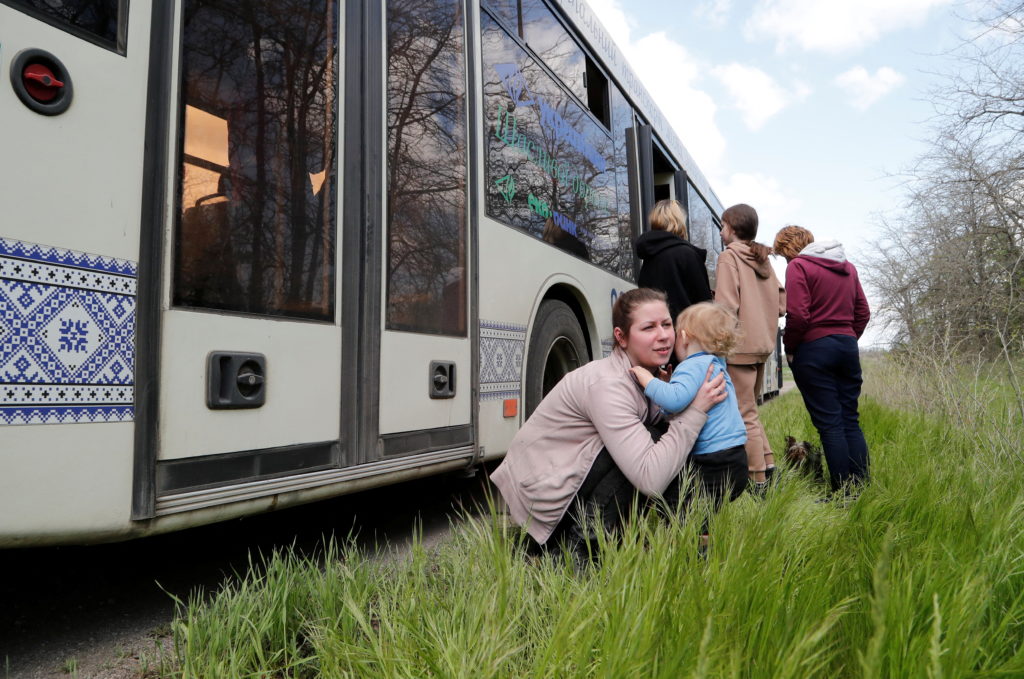 ZAPORIZHZHIA, Ukraine (AP) — People fleeing besieged Mariupol described weeks of shelling and deprivation as they arrived in Ukrainian-held territory on Monday, where officials and relief workers were eagerly awaiting the first group of civilians freed from a steelworks which is the last redoubt of Ukrainian fighters in the devastated port city.

Video uploaded by Ukrainian forces on Sunday showed elderly women and mothers with young children climbing a steep pile of rubble from the sprawling Azovstal steelworks and eventually boarding a bus.

More than 100 civilians from the factory were due to arrive in Zaporizhzhia, about 230 kilometers northwest of Mariupol, on Monday, Ukrainian President Volodymyr Zelenskyy said.

The evacuation, if successful, would represent rare progress in mitigating the human cost of the nearly 10-week war, which has caused particular suffering in Mariupol. Previous attempts to open safe corridors out of the Sea of ​​Azov city and other places have failed,
with Ukrainian officials repeatedly accused Russian forces of firing and shelling along agreed evacuation routes.

“Today, for the first time since all the days of the war, this vitally needed green corridor has started to work,” Zelenskyy said Sunday in a pre-recorded address posted on his Telegram messaging channel.

At least some of those evacuated from the plant were apparently taken to a village controlled by Moscow-backed separatists. The Russian military said on Monday that some had opted to remain in breakaway areas, while dozens left for Ukrainian-held territory. The information could not be independently verified.

In the past, Ukrainian officials have accused Moscow troops of forcibly moving civilians from captured areas to Russia; Moscow said people wanted to go to Russia.

Zelenskyy told Greek state television that the remaining civilians at the Mariupol steel plant were afraid to board the buses because they thought they would be taken to Russia. He said he had been assured by the United Nations that they would be allowed to travel to areas controlled by his government.

Mariupol became the symbol of human misery inflicted by war. A Russian siege trapped civilians with little access to food, water and electricity, as forces from Moscow pounded the ruined city in the face of stronger-than-expected Ukrainian resistance.

Ukraine’s defense also thwarted Moscow’s attempt to take kyiv in the early weeks of the war and Russia has now shifted its focus to Donbass, the industrial heartland of eastern Ukraine, where separatists backed by Moscow have been fighting Ukrainian forces since 2014. Mariupol is in the Donbass. .

Russia says its military has hit dozens of military targets in the region in the past day alone. But Ukrainian and Western officials say troops in Moscow are using indiscriminate weapons that are taking a heavy toll on civilians and making only slow progress.
While official evacuations have often failed, many people have managed to flee Mariupol on their own in recent weeks. Others are unable to escape.

“People without cars cannot leave. They are desperate,” said Olena Gibert, who was among those who arrived at a UN-supported reception center in Zaporizhzhia in dusty and often damaged private cars. “We have to go find them. People have nothing. We had nothing.

She said many people still in Mariupol want to escape the Russian-controlled city, but cannot say so openly in the atmosphere of constant pro-Russian propaganda.

Anastasiia Dembytska, who took advantage of the brief ceasefire around the evacuation of civilians from the steel plant to leave with her daughter, nephew and dog, told The Associated Press her family survived by cooking on a makeshift stove and drinking well water.

She said she could see the steelworks from her window, when she dared to look outside.

“We could see the rockets flying” and clouds of smoke over the plant, she said.

A defender of the factory said Russian forces resumed shelling the factory on Sunday as soon as some civilians were evacuated. It was unclear if there would be any further evacuation attempts.

“Several dozen young children are still in the bunkers under the factory,” Shlega said.

Before the weekend evacuation, around 1,000 civilians were also in the vast Soviet-era steelworks, along with around 2,000 Ukrainian fighters. In total, up to 100,000 people could still be in Mariupol.

The city, which had a prewar population of more than 400,000, is a key Russian target because its capture would deprive Ukraine of a vital port, allow Moscow to establish a land corridor to the Crimean peninsula, which it seized from Ukraine in 2014. , and release troops to fight elsewhere in the Donbass.

A Ukrainian officer at the plant urged groups like the UN and the Red Cross to ensure the evacuation of injured fighters, although he acknowledged that it was difficult to reach some of the injured.

“There is rubble. We don’t have any special equipment. It is difficult for soldiers to pick up plates weighing tons only with their arms,” Svyatoslav Palamar, deputy commander of the Azov regiment, told the AP in an interview. “We hear voices of people who are still alive” inside destroyed buildings.

The Azov Regiment was originally a far-right paramilitary unit and is now part of the Ukrainian army.

The Russian Defense Ministry said its forces had struck dozens of military targets in eastern Ukraine in the past 24 hours, including concentrations of troops and weapons and an ammunition dump near Chervone in the Zaporizhzhia region, west of Donbass.

The information could not be independently verified. The Ukrainian president’s office said at least three people had been killed and seven others, including a child, injured in Donbass over the past 24 hours. The Zaporizhzhia regional administration said at least two people died and four others were injured in the Russian shelling of the town of Orikhiv.

A full picture of the battle unfolding in eastern Ukraine is difficult to grasp. The fighting makes travel for journalists dangerous, and both sides have introduced strict restrictions on reporting from the combat zone.

The AP could not immediately independently confirm the strikes.

Hundreds of millions of dollars in military aid flowed into Ukraine during the war, but Russia’s vast arsenals mean Ukraine still needs massive support. Zelenskyy appealed to the West for more weapons and tougher economic sanctions against Russia.

U.S. House Speaker Nancy Pelosi and other U.S. lawmakers visited Zelenskyy on Saturday to show U.S. support. On Monday, the delegation met Polish President Andrzej Duda and lawmakers in Warsaw to express their gratitude to the country for its support for Ukraine.

European Union energy ministers were meeting on Monday to discuss a new set of sanctions, which could include restrictions on Russian oil – although Russia-dependent members of the 27-nation bloc, including the Hungary and Slovakia, are reluctant to take harsh measures.

Varenytsia reported from Kyiv, Ukraine. Associated Press journalists Yesica Fisch in Sloviansk, Jon Gambrell and Yuras Karmanau in Lviv, Mstyslav Chernov in Kharkiv and AP staff around the world contributed to this report.

The names of the main electric cars