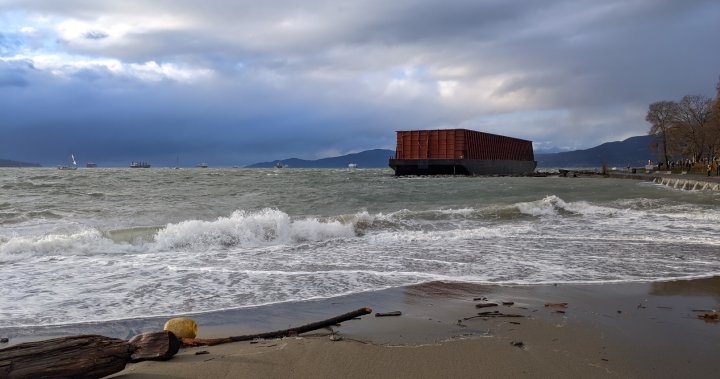 The barge that has been beached on Sunset Beach in Vancouver since being grounded in the powerful November storm will be broken into pieces for removal, according to its owner.

The barge broke away from its mooring amid intense winds on November 15, part of the same storm that devastated British Columbia highways and inundated communities in the Fraser Valley and southern interior .

Sentry Marine Towing says it is still awaiting permits and approval from several entities, including the City of Vancouver, the Vancouver Park Board, WorkSafeBC and local First Nations, but hopes to begin work within the next 30 days.

The company said a crew of contractors will then begin cutting the barge into smaller pieces, which will be slowly loaded by sea onto a flat barge.

This work could take between 45 and 60 days.

The decision to break the barge into pieces was based on risk, the company said. The cost of refloating or cutting her up was about the same, but attempting to refloat carries the risk of the barge sinking.

The company says it has taken numerous precautions to protect against environmental damage, including assessments with environmental consultants, paint toxicity testing on the barge, and implementing plans to contain dust, debris or spills during the work.

The area around the barge will be fenced during the work, he said.

0:36
Efforts to remove barge that ran aground on Sunset Beach in Vancouver have failed

Efforts to remove barge that ran aground on Sunset Beach in Vancouver failed – Nov 16, 2021

Global News has asked the City of Vancouver for comment.

Since running aground, the houseboat has become a popular destination for locals and tourists alike, and a hotspot for selfies.

The sign was repeatedly defaced with the name of the beach in the Squamish language, “Í7iy̓el̓shn,” and some Indigenous advocates said the speed with which the parody sign went up underscored how slowly Vancouver added Aboriginal names to places in the city.