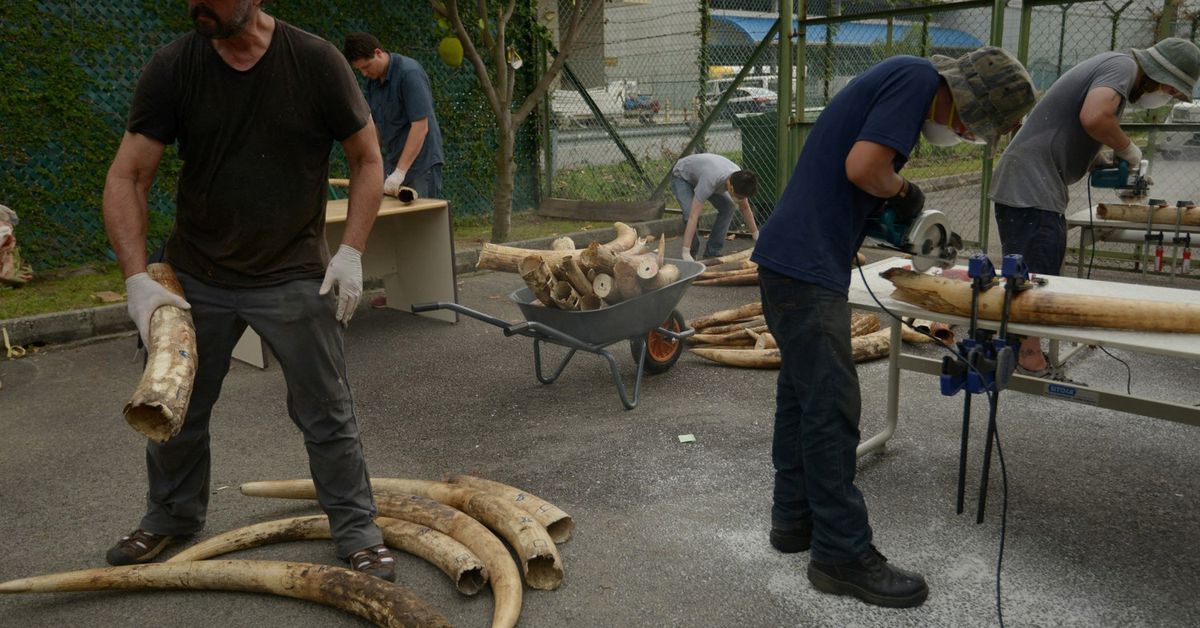 WASHINGTON, Feb 14 (Reuters) – DNA testing on seized ivory shipments that reveals family ties among African elephants killed for their tusks is helping to identify poaching areas and trafficking networks at the center of an illegal trade that continues to devastate the population of Earth’s largest land animal.

Researchers said on Monday they conducted DNA tests on 4,320 elephant tusks from 49 ivory seizures, totaling 111 tones in 12 African nations from 2002 to 2019. The results could help crack the transnational criminal organizations behind the trafficking and strengthen prosecutions.

“Combining these results with evidence collected from our law enforcement collaborators enables us to collaboratively connect the dots across a massive criminal network,” said University of Washington biologist Samuel Wasser, lead author of the study published in the journal Nature Human Behavior.

Most ivory is exported in large consignments – up to 10 tons each – shipped as marine cargo and concealed among legal exports crossing oceans on container ships. The DNA testing matched two tusks from the same elephant or, more often, tusks from close relatives found in separate containers for shipment in the same port.

Wasser said the largest amount of ivory is now being smuggled out of Uganda through the Mombasa seaport, with ports in Kenya and Nigeria also often used. Wasser noted that the ports used by smugglers have changed over time.

Previous research by Wasser and colleagues identified tusks from the same individual elephant that had been separated and smuggled by traffickers in different shipments prior to being seized by law enforcement at African and Asian ports.

The new research expanded the testing’s scope to also identify tusks of elephants that were closely related, including parents, offspring, full siblings and half siblings.

The researchers used DNA from elephant feces collected across Africa to compile a genetic reference map of various populations. The new testing thus allowed them to identify the geographic location where the elephants were poached and also connect seized shipments to the same transnational criminal organizations (TCOs).

University of Washington biologist Samuel Wasser and his team sort elephant tusks from a seizure in Singapore in 2015 and use saws to cut away ivory samples for subsequent DNA extraction and genetic analysis, in an undated photograph. Kate Brooks/Handout via REUTERS

“We found that a small number of TCOs are responsible for exporting the majority of large ivory shipments,” Wasser said, with as few as three and probably less than six such organizations and with poachers returning repeatedly to the same elephant populations.

Trafficking continues despite a worldwide ivory trade ban approved in 1989, with demand strongest in Asia.

Up to 2016, tusks were coming from elephants primarily from northern Mozambique north through Tanzania up to southern Kenya, Wasser said. Around 2016, there was a significant increase in tusks poached from a region twice the size of Britain called the Kavango-Zambezi Transfrontier Conservation Area that includes northern Botswana, northeastern Namibia, southern Zambia and southeastern Angola, Wasser said.

This area is home to 230,000 of the remaining 400,000 African elephants, a population that includes two separate species – savanna and forest elephants. The study did not involve the world’s third elephant species, the Asian elephant.

“We are losing as many as 50,000 African elephants per year,” said Wasser, co-executive director of his university’s Center for Environmental Forensic Science.

“It helps us engage with our international law enforcement counterparts by alerting them to the connections between individual seizures,” Brown said.

Wasser said that efforts made by law enforcement to connect one ivory seizure to others currently are rare, leaving cartels able to continue operating and rendering individual prosecutions “highly vulnerable to sabotage by corrupt individuals in places of power.”

Reporting by Will Dunham, Editing by Rosalba O’Brien

Psyche, the iron giant of asteroids, may contain less iron than researchers thought