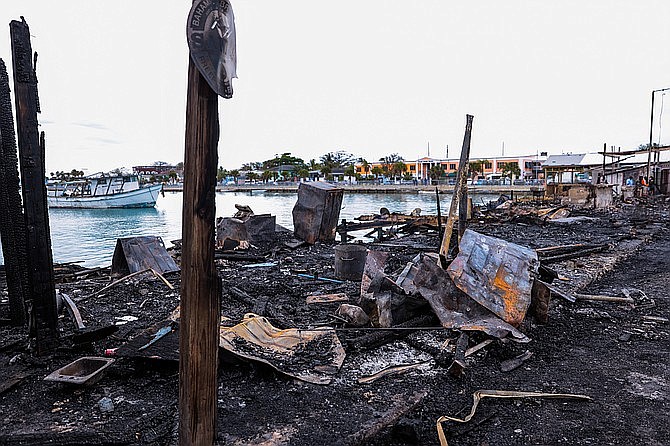 The scene of last year’s fire.

OFFICIALS from the Ministry of Agriculture, Marine Resources and Island Family Affairs have met with several senior union leaders to discuss a number of administrative matters relating to public markets and the reconstruction of the six Potter’s Cay stalls which were destroyed by a fire last year.

During the meeting, the Minister for Agriculture, Marine Resources and Island Family Affairs, Clay Sweeting, presented the plans of the Department of Public Works for the construction of the stalls. A ministry press release said it is expected that the new stalls will serve as a model for other stalls at Potter’s Cay.

In addition to the rebuilding of stalls, officials discussed the reorganization and development of Arawak Cay and Montagu Ramp and the ministry’s interest in having the Blue Hill Road market transferred to the Ministry of Agriculture. , Marine Resources and Island Family Affairs.

Mr. Sweeting said he was happy to meet with the unions concerned.

“Ongoing efforts to restore normalcy (are) finally bearing fruit,” he said. “We have successfully completed a meeting with representatives of the Trades Union Congress to ensure that we agree on the way forward to rebuild, restore and revitalize the public markets.

“My ministry is pleased to facilitate these discussions and we look forward to jointly providing solutions to existing challenges.”

“We are very pleased with the response we got from the minister in terms of handling the issues that concern him. The Minister has indicated that in a short period of time he will get back to us and we anticipate a very positive relationship,” he said.

“The minister has given us his commitment and we can review the plan and I think the workers and vendors at Potter’s Cay are going to be extremely happy and we are going to work very closely with the minister to make sure this becomes a reality. ”

The April 11, 2021 fire left six stalls completely burnt down and two others damaged.

Last May, then-Agriculture Minister Michael Pintard said the Minnis administration intended to help Potter’s Cay vendors who lost their businesses to the fire.

At the time, he said the aid would come in the form of building materials, adding that there were plans to mark out the location for the reconstruction of six stalls.

Cruise of the Year awards honored 2021

Mundra Port of Adani handles the largest container ship ever…