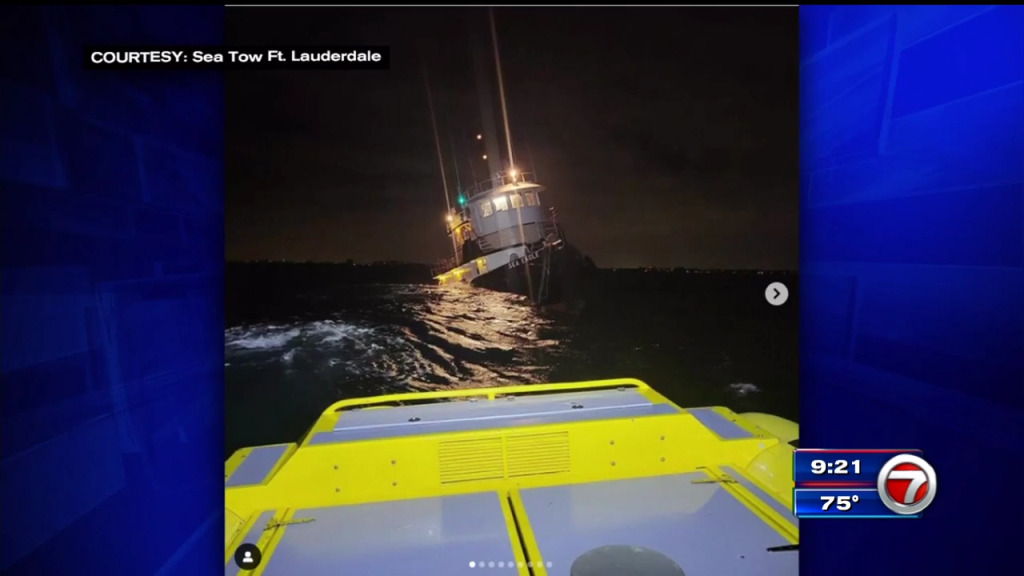 BOCA RATON, FLA. (WSVN) – Beachgoers were returned to Boca Raton hours after authorities said a barge and tug ran aground and ran aground, as crews worked to move containers onto the barge.

According to the US Coast Guard, the tugboat The Sea Eagle was pulling a barge full of containers when it began to take on water late Thursday evening.

7News cameras captured the ships on the sand just north of Hillsboro Boulevard on Friday afternoon.

“I live just down the street from here so we normally just hang out at the beach – breathe, meditate, stretch, hang out, get some sun,” another beachgoer said.

The Coast Guard said the Sea Eagle and barge were chartered by the Navy to deliver ammunition, fuel and other supplies to a naval base on Andros Island in the Bahamas.

Friday afternoon, many containers are still on the barge, some with hazardous materials signs.

The distress call that was made from the tug on Thursday evening said there were eight to 10 containers with a 1,000ft steel cable on board.

“I saw the helicopter all night, wondering what they were looking for,” Wade Greaton said.

The U.S. Coast Guard and Sea Tow responded to the call, and four people who were on board the tug were able to get off the boat safely, along with the 1,000-foot cable barge.

“The barge and the boat kept running aground on the shore and then drifting out to sea. Law enforcement and search and rescue were working to get the barge away from the tug so it probably wouldn’t capsize or get damaged,” Greaton said.

The crews were then able to secure the boat on the sand.

The barge was carrying containers of ammunition, explosives and was heavily guarded.

Some of the materials inside the containers are corrosive. Hazmat signs could be seen on the containers, as teams worked to remove and secure them quickly.

“I came here this morning, and it was a pretty full houseboat, like you see in shipping lanes, and now obviously they’re removing all the containers,” Greaton said. “There must have been two dozen containers on that barge.”

The beach was closed for about a quarter of a mile in each direction as crews worked to secure the two vessels.

The USCG has been monitoring the vessels throughout the day and will continue to monitor until the munitions on the barge are removed and taken to a safe location.

Late Friday afternoon, the US Navy gunnery team was on the way to the location to ensure the ammunition was secure.

Officials confirmed on Friday that the tug was no longer leaking fuel.

The Coast Guard stresses that residents who live near the area are safe.

The grounding of the two vessels is still under investigation.

Copyright 2021 Sunbeam Television Corp. All rights reserved. This material may not be published, broadcast, rewritten or redistributed.

Join our newsletter for the latest news straight to your inbox