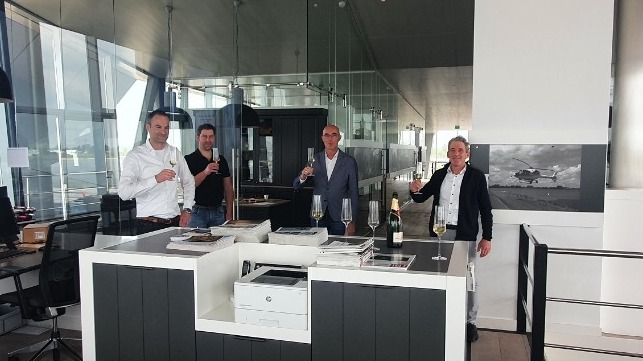 
Concordia Damen has signed a historic contract with Lenten Scheepvaart. The contract, signed on March 18 by Harm Lenten and Chris Kornet, CEO of Concordia Damen, is for the construction of the world’s first inland waterway vessel running on hydrogen.

The ship, which will be baptized MV Antonie, will measure 135 meters long, weigh 3,700 tonnes and will be equipped with revolutionary fuel cell propulsion. It will be used to transport salt between Delfzijl in the north of the Netherlands and Botlek in the port of Rotterdam for Nouryon, one of the world’s leading suppliers of chemicals.

Chris Kornet, CEO of Concordia Damen, said of the contract: “At Concordia Damen, we have always been at the forefront of bringing increased sustainability to our industry. Greening the inland navigation sector is something we are passionate about and we will continue to work in this direction. I think there will not be just one way to reduce emissions in our sector, but several approaches. Hydrogen is likely to play an important role in achieving zero emissions in inland navigation. Lenten Scheepvaart is to be congratulated for playing this leading role. “

Lenten Scheepvaart received a grant for the construction of the vessel worth 4 million euros. The grant, from the Dutch government department of infrastructure and water management, aims to stimulate the development of the use of hydrogen as a fuel on the zero emission inland waterway route.

Likewise, the vessel and its operation will benefit from the subsidized hydrogen bunkering station in Delfzijl.
Concordia Damen has a long history of developing sustainable vessel technologies for the inland navigation industry, including a number of hybrid powered vessels.

Now that the Carlton Preserve brush fire is out, the wildlife center prepares to treat injured animals