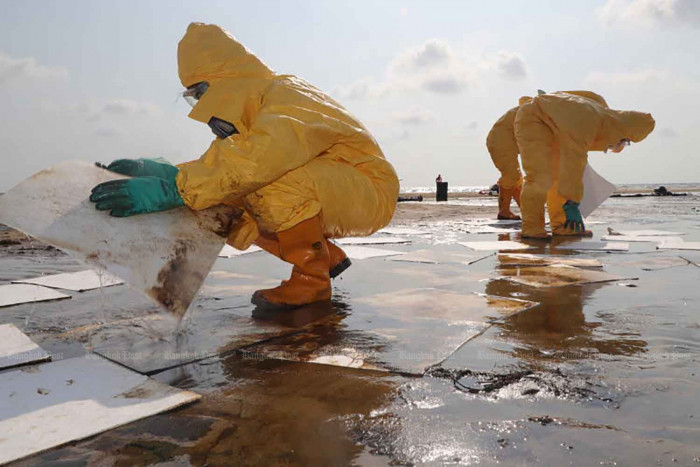 700 residents affected complain of a spill

Pollution control department officials are working to clean up the oil spill that washed ashore on a 2-kilometre stretch of Mae Ramphueng Beach in Rayong on Saturday. (Photo: Pornprom Satrabhaya.

Rayong: Authorities will shut down an emergency center after oil sludge was cleared from Mae Ramphueng beach and the sea off the eastern province’s waterfront.

A committee of state agencies, tour operators, beach vendors and environmental groups will be set up to inspect the area and assess the situation when the tide is out to ensure there is no more oil.

All goes well, the emergency center supervising the cleaning operation will then be closed.

The leak from the pipeline owned by Star Petroleum Refining Plc, which was first detected last Tuesday, polluted Mae Ramphueng beach on the Rayong mainland.

Provincial authorities and various agencies such as the 1st Naval Area Command removed the slick.

However, authorities will continue to be prepared to monitor any oil that may persist.

Rear Admiral Apichart Worapamorn, deputy spokesman for the Royal Thai Navy, said around 80,000 liters of dispersants had been approved for the cleanup operation.

No sludge was found on shore, although oil that was broken down by the dispersants into small droplets could linger on the sea surface and be washed ashore, Rear Admiral Apichart said.

Sunthorn Rianphumkarnkit, Rayong’s public health doctor, said health officials had carried out a random inspection of seafood at several markets in Rayong and no oil contamination had been found.

Rayong Deputy Governor Anant Nakniyom met with residents affected by the oil spill on Wednesday at a complaints center that had been set up near the beach.

About 700 people have filed complaints asking for help and more are expected, Mr Anant said.

About 30 local fishermen from Petra Beach in Tambon Ban Phae in Muang district of Rayong on Wednesday delivered a letter of complaint to the mayor of Ban Phae, Pairat Arunwessaset, asking for compensation for the damage caused by the slick.

A fisherman identified only as Jongkol said they were traditional unregistered fishermen using boats without motors.

They fear they will not be entitled to assistance, Mr Jongkol said, adding that the mayor would find ways to help them.

They were ordered to suspend fishing for 30 days after the slick spread.

Natural Resources and Environment Minister Varawut Silpa-archa said efforts were being made to restore the environment.