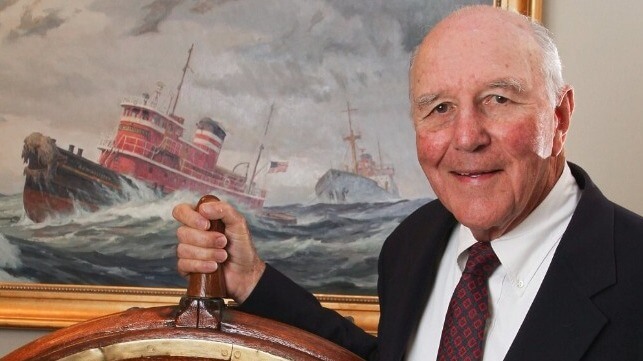 “It is with heavy hearts that we announce the passing of our beloved captain. Brian, who changed the future of McAllister Towing when he bought the business with his brothers and cousins, passed away peacefully this morning. at his home,” the firm said in a statement. “We ask that you keep the McAllister family in your thoughts and hearts during this very difficult time.”

Brian McAllister was part of the fourth generation of McAllisters to run the business, which is now under fifth generation family ownership. He was born in Brooklyn and attended SUNY Maritime, where he graduated in 1956 with a degree in marine engineering. He served in the navy for two years before going to the high seas with Isbrandtsen Lines as a third engineer. In 1959, he joined the family business and worked on board McAllister tugs. He eventually earned his master’s degree with piloting, but moved ashore in 1964 to take on the role of harbor master.

In 1974 Brian McAllister and other fourth generation members of the family purchased the company from their predecessors. After taking over as chairman in 1984, he oversaw the modernization of the fleet, including the introduction of Z-drive tugs, and he helped lead the company’s expansion into many other ports in the Atlantic coast, notably Portland, Baltimore, Wilmington, Georgetown, Charleston. , Jacksonville, Port Everglades and San Juan, Puerto Rico. He became sole proprietor in 1998 and chairman in 2013.

Brian McAllister was also well known as a philanthropic supporter of SUNY Maritime, providing both financial support and ship support services for the college. In 2016, SUNY Maritime awarded him an honorary doctorate in recognition of his many contributions to the college and the maritime community.