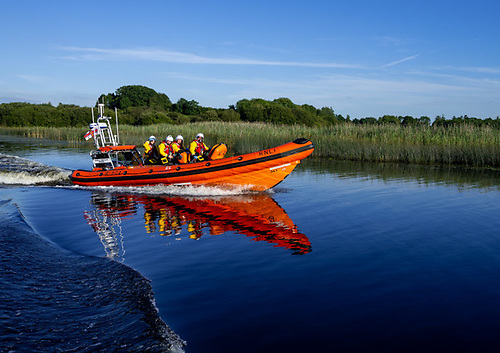 The Carrybridge RNLI coastal lifeboat Douglas Euan & Kay Richards was launched at the request of the Belfast Coastguard shortly after 6.33pm on Friday evening (August 12) to a vessel which had been struggling in shallow water near the Naan Island.

It turned out to be the start of a busy evening for the Lough Erne lifeboat volunteers in Northern Ireland, who helped a total of 11 people across four boats.

Once on scene, the volunteer crew located two nearby vessels, both of which had been struggling in shallow water.

The first vessel, with one person on board, was assessed and the decision was made with the owner’s permission to tow it safely into deeper water.

With the first ship in safe water, attention turned to the second boat, with five people and a dog on board, which ran aground further afield.

The crew transferred four people from this ship to the first ship as they traveled together. A safe route has been established for the lifeboat crew to tow the victim into deeper water with the owner’s permission. The two ships then continued their journey.

Meanwhile, a third vessel was spotted by the lifeboat crew entering the same area of ​​very shallow water. The lifeboat approached this vessel, which had two people on board, then, after speaking with the owner, was safely escorted to deeper water where they were able to continue their journey.

As the lifeboat crew returned to station, they observed a fourth vessel with four people on board which had experienced engine trouble after being caught in the weeds about a mile northwest of Knockninny . The lifeboat crew, with the permission of the owner, set up a tow and returned the vessel to her private berth.

Speaking later, Stephen Scott, lifeboat operations manager at Carrybridge RNLI, said: ‘We are now in the summer season, we urge all boat owners to ensure you have the relevant charts required before you start your trip, life jackets for everyone on board and a way to call for help if you get into trouble.

“If you see someone in trouble on the water or you are in trouble yourself, the number to dial is 999 or 112 and ask for the coastguard.”