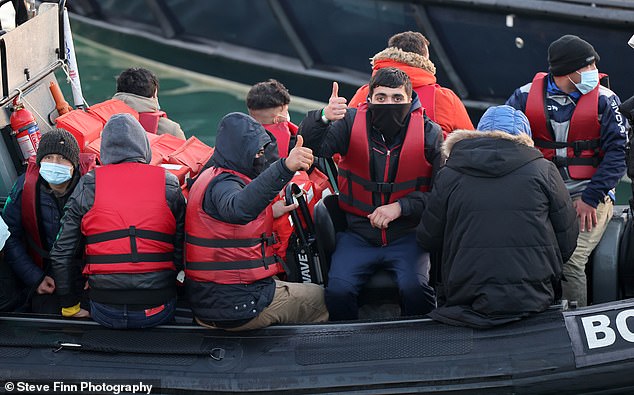 Around 90 migrants were brought to Dover by Border Force officers in freezing conditions on the first day of arrivals after a yacht with migrants arrived in Rye harbour.

The migrants arrived in Britain in dinghies on Saturday morning and were towed to Tug Haven in Dover by Border Force.

The latest arrival brings the total number of registered migrants arriving through the English Channel to 1,448 on at least 49 boats in 2022.

Those aboard the dinghy disembarked and were taken away for treatment, but their vessel had to be separated from the Border Force Seeker it was attached to as it began to sink.

Home Office data shows the meteoric rise in the number of people crossing the English Channel last year, with a dramatic spike in November and December

There were around 90 people on the boats sailing in a small window of opportunity when the English Channel was flat and calm before the gales picked up and the seas turned rough later in the day.

The latest arrival comes after 21 migrants dived from a yacht into a river after its sailor beached it at low tide on February 12.

The group capsized the 20ft vessel when they rushed to one side to see why they had stopped moving, knocking it over into the water.

They got stranded near the shore of Rye Harbor in East Sussex around 1pm after crossing the English Channel and heading up the river.

Footage, shared with MailOnline, showed people desperately swimming towards a nearby dinghy which was deployed from the yacht.

They got stranded near the shore of Rye Harbor in East Sussex around 1pm after crossing the English Channel and heading up the river. Some were forced to jump into the water

The group capsized the 20ft vessel when they rushed to one side to see why they had stopped moving, knocking it over into the water.

Some people were forced to jump into the water as the yacht slowly rocked and capsized when too many people crowded to one side.

At least one man could be seen swimming in the water with an orange life jacket towards the dinghy.

Footage taken later that evening showed the boat after it was refloated by responders from the Royal National Lifeboat Institution (RNLI).

Official figures first released yesterday showed 28,526 people arrived in the UK after crossing the English Channel in small boats last year – more than 95 times as many as in 2018.

Home Office officials have warned that this year more than 65,000 people could arrive in the UK by small boat.

The number of UK arrivals peaked in November 2021, when 6,971 small boats arrived in a single month.

Despite high-profile deaths highlighting the dangers of crossing the 21-mile Strait of Dover in unsuitable boats, migrants continue to arrive in large numbers

November 27 also saw the greatest loss of life in the migrant crisis when 27 people tragically drowned in the English Channel after their dinghy collapsed, including seven women and three children.

Despite the dangers of crossing the 21-mile Strait of Dover in unsuitable boats being highlighted, migrants continued to arrive in large numbers throughout December.

The number of asylum applications lodged in the UK has also reached its highest level in almost two decades, while the backlog of cases awaiting decision continues to soar.

Home Secretary Priti Patel has pledged to end the smuggling of people across the Channel with the Nationality and Borders Bill which is currently before Parliament.

The bill will stop and divert dinghies suspected of transporting illegal migrants to the UK and return them to where their sea journey to the UK began, subject to agreement with other countries.

The Home Office is said to have been trying to strike deals with countries to allow Britain to process asylum claims overseas to deter Channel crossings.

How many migrants have crossed the English Channel from France to the UK since the start of the year?

According to Home Office figures:

Total to date: 1,388 migrants reported crossing in at least 49 boats