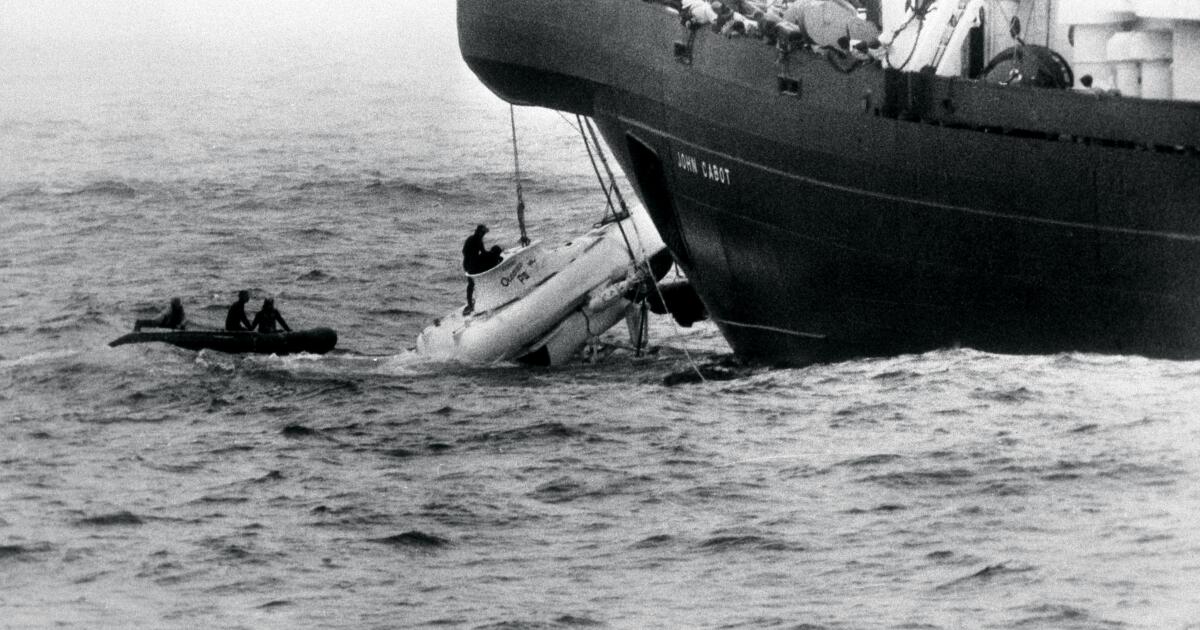 
Larry Brady was asleep when the phone rang. “Sub lost,” her boss said.

Brady needed no further explanation. He dressed and went to work, to a Navy lab in Point Loma, where he was a key member of a team specially trained to handle disasters on the high seas.

It was August 29, 1973. Earlier that day, a tiny two-person submarine laying a telephone cable 150 miles off the coast of Ireland got stuck on the floor of the Atlantic Ocean. A surface accident tore off one of the hatches and flooded the aft part of the vessel.

The Pisces III was 1,575 feet lower, too deep for divers to reach with a tow rope. They would need another sub to get there, and fast. The two men of Pisces III, Roger Mallinson and Roger Chapman, had perhaps 72 hours of oxygen.

Cries for help were made to another Fish working in the North Sea and another in Canada. The US Navy was also notified, which is why Brady’s phone was ringing.

He was the main pilot of CURV-III, a remote-controlled submersible designed at the Naval Undersea Center to recover training torpedoes and other lost ammunition. An earlier model made international headlines in 1966 when it found a hydrogen bomb off the coast of Spain that had been dropped by a B-52 after a mid-air collision with a tanker.

Now the submersible and its crew of seven were flown by a cargo plane in Cork, Ireland, and in the middle of a drama it would have almost as many ups and downs as the high seas – malfunctions of MacGyverish equipment and patches, bruised egos and selfless sacrifice, terror and ultimately triumph.

It was a three-day cliffhanger that rivaled the world, with news crews hiring fishing boats and helicopters to reach the site so they could send regular updates.

Now, the story has for the most part faded from public memory, replaced by more recent accounts of the heartbreaking turmoil humans find themselves in.

It hasn’t faded in Bonita’s house where 85-year-old Larry Brady lives. “I remember every nerve-wracking detail,” he said.

The story of Pisces III gets a facelift in a new 369-page book, “The Dive: The Untold Story of the World’s Deepest Submarine Rescue,” which will be published by Pegasus Books in early June.

British author Stephen mcginty was less than a year old at the time of the accident, too young to remember. But he grew up fascinated by the ocean, and eventually he heard about the crash and the scramble to save the lives of the two submariners – heard about it, and rightly so, while he was at sea. on a cruise.

Then he came across an old 1973 newspaper story about Pisces and became more intrigued.

“It was the whole three and a half day ordeal of the men, what they did and how they survived, and the Brotherhood of the Sea,” McGinty said in a telephone interview from his home in Scotland. “I was very moved by the idea that in a disaster, they put everything else on hold and try to go there to help. There is this sense of duty to offer help.

McGinty is a reporter for The Sunday Times in London, as well as a documentary producer. His tale of Pisces unfolds with a cinematic twist, flipping back and forth between the small, cold submarine as oxygen dwindles and carbon dioxide rose, and the top, as crews concocted rescue plans. frantic to tie a rope to the submarine and tow it to the surface. The rights to the film have been ceded to the producer behind “Saving Private Ryan” and “Speed”.

McGinty said his research ultimately directed him to Point Loma and its array of Navy bases and civilian contractors working on various maritime projects. “If there is a still quiet center of the universe for submarines in 1973,” he writes in the book, “it’s San Diego.”

The CURV-III was the latest in a series of remote-controlled submersibles dating from the 1950s. It was 13 feet long, five feet wide, and seven feet high. It weighed 5,000 pounds and was operated via a cable connected to a control panel inside a small trailer on a support vessel.

Brady sat at the control panel and used joysticks to manipulate the direction of the submersible, lights, cameras, and an arm that could grip and hold.

He loved work and was good at it. His career ultimately lasted around 40 years, taking him around the world to salvage helicopters, airplanes and more. He was convinced that CURV-III could help Pisces III as well.

When his crew arrived in Ireland, however, it became clear that the executives of the British company responsible for the stranded submarine viewed the Yanks as replacements. They would only be used if manned submarines imported from Canada and the North Sea failed.

“It was 1973, and Britain was in decline,” McGinty said. “There was this feeling that if the Americans were the ones saving them, it would be a real slap in the face.”

The first rescue submarine was dispatched but started to leak and had to resurface. The second submarine couldn’t find the Pisces III, which was resting on its tail in a canyon, making it difficult to ping with the sonar.

On the third try, Pisces was found, but after rescuers attached a tow hook, he slipped.

Brady and CURV-III were preparing to take off. The crew plugged in the control cable and there was an explosion of electricity. Water had entered the system, and now the cable was a melted mess on one end. They would have to make a repair.

And so on, for hours and hours. Everyone was exhausted and nervous. In Pisces down below, Mallinson and Chapman struggled not to use all the oxygen and give up hope.

Eventually, one of the manned submarines attached a tow rope, but it was not considered strong enough to pull the Pisces to the surface. Brady sent CURV-III down and secured a second with a toggle bolt.

“It almost seemed disappointing after all the travel, the loss of sleep and the times of anxiety,” Brady says in McGinty’s book, “but the insertion really wasn’t any more difficult than parking the car in the garage. after a long drive.

The recovery made headlines around the world. Mallinson and Chapman became for life friends, talking on the phone every September 1 to celebrate the anniversary of their rescue. According to Chapman’s estimate, there was less than 20 minutes of oxygen remaining when they reached the surface.

Brady has never met men, “a bit bitter pill to swallow,” he said. He and the crew of the submersible were brought back to Cork, where Brady bought a bottle of Irish whiskey to celebrate.

Upon their return to San Diego, they were greeted as heroes. The city issued a proclamation declaring it “CURV-III Day”.

“We knew in our hearts what we had done,” Brady said, “and we had done good, and we were happy.”