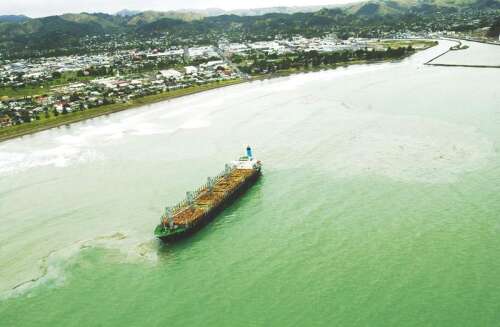 The story of the Jody F Millennium.

Twenty years ago a ship named after a famous actor brought Gisborne to worldwide attention when it ran aground in the bay while attempting to set sail from the harbor on the night of Waitangi Day. Wynsley Wrigley, a reporter for the Gisborne Herald, recounts the ordeal of the Jody F Millennium. . .

Over a thousand people watching from the city beaches of Gisborne cheered as the timber carrier Jody F Millennium was refloated 18 days after running aground off Waikanae Beach on Waitangi Day, 2002 .

Meng Foon, who had been elected to his first term as mayor of Gisborne less than four months earlier, has vivid memories of those days 20 years ago.

“It was my first major event,” he said.

“Damn, it was so huge, parked at the end of Gray Street.”

The log ship, carrying 20,000 tonnes of logs, was battered by high winds and rough seas despite being moored in port.

It was decided to take the ship out to sea as efforts to secure it were deemed too dangerous. But when the Jody F left port, rougher seas knocked it over and the ship ran aground.

“The seas were exceptionally huge at that time,” Mr Foon said.

About 25 tonnes of oil was expected to leak in Turanganui-a-Kiwa/Poverty Bay.

Mr Foon said he felt a heavy burden from the oil leak.

“There was a lot of anxiety about the pollution – especially from tangata whenua.”

Hundreds of workers cleaned up the oil-contaminated sand and much of the heavy, viscous oil in the ship’s tanks was transferred to the Navy tanker HMNZS Endeavour.

The oil hit an area of ​​approximately eight kilometers of coastline from Tuahine Point to the opposite Gisborne airport.

The oil landed mainly on Waikanae, Midway and Kaiti beaches, the log storage area north of the port and Sponge Bay. Small quantities washed up on beaches further north and south. About 30 cubic meters of oil mixed with sand were collected.

Another 600 to 800 liters of oil were collected from the collection areas of the dams.

Contaminated sand and collected oil were taken to landfills in Auckland and Napier.

Before being refloated, the logs were removed from the ship by helicopter or barge.

The vessel was eventually towed to deeper water by various tugs, including one from Melbourne.

Hundreds of people flocked to Waikanae and Midway to see the sight of the 150-meter vessel in distress stranded so close to shore.

Crowds swelled to more than a thousand at the weekend, vying for the best sites and bringing with them flasks of hot coffee and picnic food.

The ship was then repaired in Japan after being towed from Tauranga on a 40-day voyage.

United Salvage’s Ian Hoskison said the damage to the hull was more extensive than his team expected.

The worst damage was an eight meter breach of the hull in the number five ballast tank on the starboard side.

In some places the slit was a meter wide.

“It was a significant hole, which surprised us,” Mr Hoskison said.

Salvage engineers fabricated a steel box and welded it to the slot for the trip to Japan.

Mr Foon said the grounding started out as a civil defense matter but quickly escalated to a higher level being handled by the Maritime Safety Authority (MSA).

“As mayor, there were a lot of interviews and meetings with the media.”

A major concern for Mr Foon and his advisers was the possibility of Gisborne District Council and Port Gisborne paying millions of dollars in compensation.

Shipowners Twin Bright Shipping Company and its parent company have filed a claim for more than $20 million.

Insurers from both parties reached a settlement with the plaintiffs in 2008.

The board only had to pay a few thousand dollars in legal fees.

Mr Foon said it was a relief to the community that after years of litigation the council was not found to be responsible.

The MSA report indicates that the port pilot sent the vessel into a port of uncertain depth.

The MSA was surprised that no hydrographic survey was carried out after the maintenance dredging to determine the results and the depths reached.

The report criticized the pilot for leaving the Jody F Millennium once the ship entered port, which he said was “a dereliction of his piloting duties”.

He faulted the ship’s captain for not challenging the order to leave port and said he would have been entitled to refuse the pilot’s request to leave the ship.

“There were recommendations from the surveys that indicated the need for health and safety improvements to operations.

“I was proud of everyone involved. We must keep health and safety at the forefront of everything we do. »

Gisborne was not the only time the ship, then known as the Jody F Millennium, ran aground.

After being repaired in Japan and renamed Millennium Bright in June 2002, the ship ran aground in November 2006 near the port of Nepoui, a town on the west coast of New Caledonia built for the mining industry.

It was refloated at high tide with the help of two tugs.

In June 2008, the ship was renamed Singapore Grace when it was sold to Singaporean interests.

The ship acquired its third name, Birch 4, when it was sold to a Hong Kong company in April 2010.

The ship was sold once again, in April 2015, to Greek interests, who renamed her Georgia K.

In 2019, the ship was broken up in the Bangladeshi port of Chittagong.

Unwanted guest: Log ship Jody F Millennium beached in Poverty Bay in February 2002. A salvage operation finally freed the ship on day 18 from its predicament, after mesmerizing a daily audience, who watched helicopters remove logs from the ship, surfers riding the waves in front of it, and finally, tugs bringing it back out to sea. Photo by Paul Rickard

IN DAYLIGHT: The day after Jody F Millennium ran aground in Poverty Bay. Photo by Paul Rickard

LOG SHIP BACKGROUND: A family enjoys a meal of fish and chips, with the Jody F Millennium in the background. Photo by Paul Rickard

GOOD RIDDEN: Although it makes for compulsive viewing every day in the bay, the environmental issues with the Jody F Millennium were a huge concern so there was great relief when the ship was refloated. Photo by Paul Rickard

CHOPPERS AWAY: A helicopter carries a log from the stricken Jody F Millennium to lighten the load. Photo by Paul Rickard