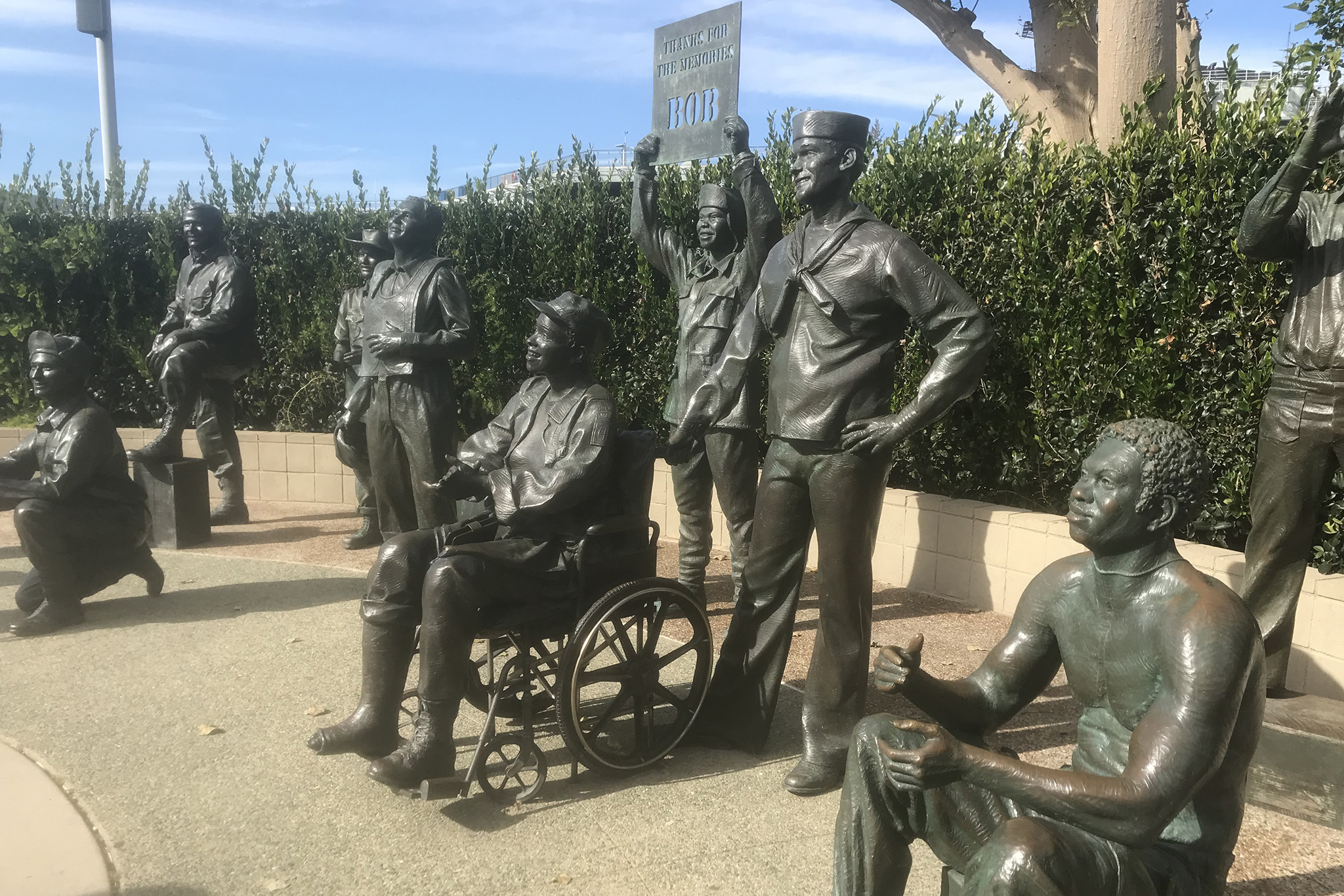 Gracious kindness. It’s Bob Hope, the WWII stand-up icon. His voice echoes on the waterfront. “Good evening, ladies and gentlemen… My grandfather was a famous naval hero […] You may have read about him: Admiral Tuna, Chicken of the Sea. Laughter springs from the past. I stand among Bob’s “audience” of WWII soldiers, sailors and nurses on the waterfront, directly across from the USS Midway. Agree, these are life-size bronze sculptures, still located not far from the famous victory sculpture, “The Kiss”.

It’s so cool, but the sea breezes make me hungry. The fish market is right next to us, but in terms of cost? Nuh uh. I notice that Café 41 (named after the Midway) is open on the aft deck of the former aircraft carrier. It will be perfect. But the volunteer on the bridge says to me, “You have to buy a $26 ticket to get on the boat and access the cafe. Awesome. So I go back to the Embarcadero and start looking for some good cheap fodder. Carnitas Snack Shack has some good cheap stuff, but it’s basically a bar, and I don’t want to be tempted so early in the afternoon. I walk past these brand new buildings that house very expensive places like Del Frisco’s Double Eagle Steakhouse. Their steaks? They can cost $100.

It’s the savory marinade, cream cheese, and peperoncini that make this a winner.

But listen! What do I have here? A familiar sign:. Ryan Brothers Coffee, straight from Barrio Logan! Another sign above the same place says “Beach Hut Deli. Since 1981. Which is pretty old for here. Weirdly, the place is in this über-modern building. Like above the entrance leading to Pacific Highway, an artist created sexy wavy shapes that move with you. It’s almost poetic. Plus, they instantly planted mature Canary Island palm trees around the cafe and two giant yellow umbrellas on the terrace. But you can still seeing through them the masts of the Star of India sailboat, among other silhouettes. So that’s pretty cool. Trouble? I’m pretty sure we’re going to hit a financial wall here too. But what the heck. Try.

Inside, all surfboards and palapas. Cool, actually. The palapas reduced the corporate feeling of the place. The first thing I see on the menu is the soup offering. Creamy Tomatoes, Clam Chowder, Turkey Lasagna, and Creamy Chicken Poblano Soup – and only $5.50 each! That’s it. Anyway, I start with a soup. Partly because at the cold, anywhere in the shade you always feel a little Jack Frost. Something warm in the belly will do a world of good. But which one? I like the color of the tomato, but also the idea of ​​a nice thick chowder, and hey, the nutritious combo of chicken, corn, and black beans from the poblano sounds great. But in the end, it has to be the “creamy tomato with cream, garlic, parmesan.”

Kayleigh brings my tomato soup and my Cali cheese steak.

“You can get soup and half a sandwich if you want,” says the daughter, Kayleigh.

“Well, that’s really filling,” she said. And the list of sandwiches offers quite a choice. A few dozen. Continued. I reduce it to “Pig Kahuna” (pulled pork, BBQ sauce, Tabasco, cheddar, and pineapple on a toasted French bun); or the ‘Cali Cheese Steak’, basically roast beef, a savory marinade, plus – and here’s what got me – cream cheese and peperoncini, those sweet, tangy, mildly spicy peppers they call ‘peppers sweet Italians. I chose well. Maybe it’s just because I’m totally starving, but this combination of chunks of steak and peperoncini, complete with cream cheese and grilled french roll, is the best. Oumami! I also get a lemonade ($2.75), which does a great job refreshing the mouth.

In fact, I’m getting a growing respect for the humble sandwich itself, now that the world is letting it go on all the new flavors that have come to town. How could Lord John Montague, the fourth Earl of Sandwich, know what he was starting when he asked his butler to put roast beef between roughly cut slices of bread so he could eat with his hands while playing cards at the gaming table in 1762? Either way, I consider it a bargain at $14.25 for the soup, cheesesteak sandwich and lemonade here on the touristy waterfront. So, okay, I find out that this grocery store is part of a mega-franchise operation, over 40 outlets, almost all of them in California. But hey, they still make great food at a really reasonable price.

The ultra-modern facade on the outside of Beach Hut makes the reasonable prices inside surprising.

In closing, I absorb the sounds of the waterfront. Tugboats and ferries emitting small, authoritative squeals, trains issuing haunting warnings from the Santa Fe depot, and right behind us, seagulls fighting over someone’s sandwich. a. But all this in a context of calm. No traffic noise. Surprising. Come summer, it’s going to be packed, that’s for sure. But it’s still a good place to come if you’re, say, writing your great American novel. It’s so quiet.

I decide to go back and take one more walk among those happy guys and girls, the bronze statues full of life who mock Bob Hope replicas. Statues are generally serious business. Here, the men and women of metal are happy. As I walk back there, Bob’s recorded voice says, “Last night I had a great time. I slept directly in the barracks with the boys. You know what barracks are, right? Two thousand beds separated by individual crap games. A group of ladies, visiting from Vietnam, pose for photos with their arms around the ‘Boys and Girls’ statues. I think these “greatest generation” men and women would be happy for the company.