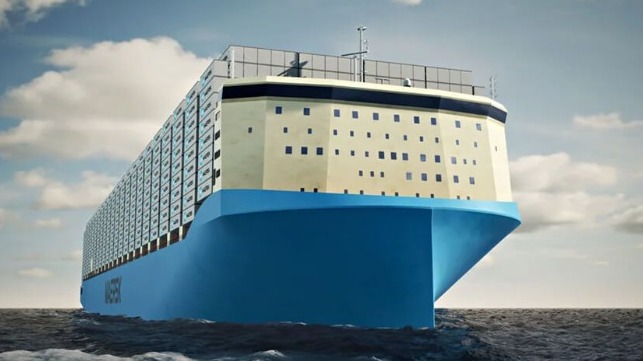 
Efforts are moving forward to build the world’s first large-scale commercial e-methanol production facility to be located in southern Denmark. The project schedule is coordinated with the scheduled delivery of Maersk’s large methanol-ready dual-fuel container ships, with production of the fuel to begin in the second half of 2023. Last summer, AP Moller – Maersk announced that it would partner with REintegrate, a subsidiary of Danish renewable energy company European Energy, working closely on the development of the facility.

European Energy, a Danish developer and operator of green energy projects, is developing the first large-scale commercial e-methanol production facility, with hydrogen supplied by a 50 megawatt electrolyser plant the company has now commissioned at Siemens Energy. The plan is that the factory will be built in Kassø, located in southern Denmark, near the German border. Thanks to the nearby 300 MW solar park in Kassø, also developed by European Energy, the project will have access to the low-cost renewable electricity needed to produce profitable e-Fuel. End users of e-Methanol will be Maersk and fuel retailer Circle K, among others.

“We are delighted to place this significant order for what is believed to be the world’s first large-scale commercial Power-to-X project of its kind,” said Knud Erik Andersen, CEO of European Energy. “This is a critical moment in the green transition as we make progress in decarbonizing hard-to-reduce sectors such as the shipping industry, and we believe that Siemens Energy’s exceptional expertise in of electrolysers will become a solid base to grow our business of providing sustainable fuels to the world.

European Energy projects that e-Methanol can become a key element in achieving IMO targets for the decarbonisation of the shipping industry. The company notes that global shipping consumes about 3,050 terawatt hours (TWh) of global final energy consumption. This is more than five times the total electricity consumption of Germany. As almost all of today’s electricity is based on fossil fuels, mainly fuel oil, the maritime transport sector emits around 1,000 million tonnes of CO2 per year, or around 13% of greenhouse gas emissions. of global transportation.

Siemens Energy has obtained the order from European Energy for the delivery of an electrolyser installation. They will design, supply and commission the electrolysis system consisting of three complete networks of its latest and most powerful range of PEM (proton exchange membrane) electrolysis products, including transformers, rectifiers, distributed control system (DCS) as well as equipment to produce demineralised water. . European Energy, as the project owner, will be responsible for the engineering, procurement and construction, as well as the operation of the facility.

“Together with our partner European Energy, we are taking the lead in decarbonizing the maritime industry,” said Stefano Innocenzi, senior vice president of the New Energy business at Siemens Energy. “With this project, we will commercialize e-Methanol on a large scale. E-methanol or derived e-fuels are predestined for long-distance maritime and road transport as well as aviation. successful commercialization and scaling of our PEM technology.

Last summer, Maersk pointed out that REintegrate had continued production of green e-methanol at its test lab in Aalborg. They said plans are for the new facility to produce the approximately 10,000 tonnes of e-methanol that Maersk’s first ship will need each year while in service. Previously, Maersk said having an adequate supply of methanol would be one of the biggest challenges for its new ships and the company has moved aggressively to support the development of production and infrastructure that will be needed to support the conversion. to the green alternative. fuels.