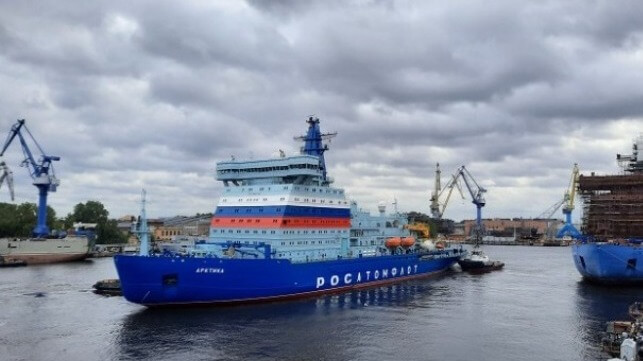 The Arktika, Russia’s newest nuclear icebreaker, has completed post-repair sea trials and has left St. Petersburg for the Northern Sea Route, where it will join a concerted effort to aid vessel traffic in thick ice. The brand new vessel has been under warranty repairs since July, mainly for the replacement of a propulsion engine.

Its restoration and return to service is timely, as traffic on the NSR was hampered by the early ice formation. The sudden freeze blocked shipments of construction materials for several infrastructure projects along the route and left several merchant ships briefly stranded.

“Arktika, the world’s most powerful multipurpose nuclear icebreaker, is now back to normal operations, ”commented Mustafa Kashka, CEO of operator Atomflot. “With the new propulsion engine, we have reached the nominal capacity of 60 MW. Arktika will not stop at its home port, but will provide icebreaker assistance to ships along the Northern Sea Route, as the ice conditions are difficult there. “

Three other Atomflot nuclear icebreakers – the Vaygach, Taymyr and Yamal – are already there and participate in operations on the Northern Sea Route. Vaygach assists a convoy of eight ships – including freighters Kumpula, Selenga, Vladimir Rusanov, Severny Proekt, RZK Konstanta, Turukhan, Grigory Shelikhov and Mechanic Pustoshny – and progressing well in the cold eastern part of the route.

“The convoy crossed the Vilkitsky Strait, one of the most difficult segments of the Northern Sea Route,” said Leonid Irlitsa, first deputy general manager for navigation at Atomflot. “This is the first time that we have provided icebreaker assistance at this time of year. by Vaygach the captain must take into account that each ship in the convoy has different performance capabilities. At the moment, the convoy is sailing in the Strait of Matisen.

The Taymyr and Yamal are responsible for operations under long-term service contracts. The nuclear icebreaker 50 years of victory (50 Let Pobedy) will also leave for the Northern Sea Route once its repairs are completed in early December.

Nicole Kidman’s Frozen and Destroyer: the selection of TV movies

What are the causes of waves in the ocean? Energy analysis and wave types