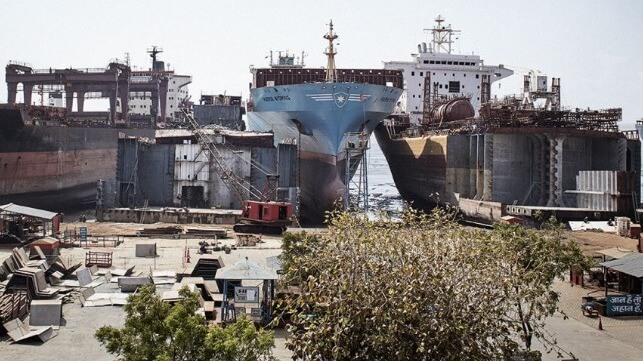 According to Alphaliner, aging boxships that would normally be decommissioned remain in service as owners take advantage of a booming container charter market.

In its latest weekly report, Alphaliner says the demolition market has seen a significant decline over the past year as container ship owners opt to keep aging vessels in service. The impact has been a substantial drop in demolitions, with just 16,500 TEUs of container-carrying capacity scrapped in 2021 – a six-year low. The annual rate is only a fraction of the 194,500 TEUs scrapped in 2020 and the 655,000 TEUs withdrawn from the market in 2016.

The demolition market slowed considerably in the second half of the year, when the charter and resale markets for boxships soared and large carriers like MSC bought up older and smaller tonnages at all costs . During this period, only four ships have been sold for demolition worldwide, all with an individual capacity of less than 1,000 TEUs.

This despite soaring scrap prices, with buyers in Turkey, Bangladesh, India and Pakistan offering nearly double 2020 prices. South Asia scrap prices were recently $560-615 per LDT, while demolition prices in Turkey were around $340.

“The scorching charter market and the astronomical charter rates available have prompted [non-operating shipowners] to retain 20-30 year old older vessels in their fleets, many of which would otherwise have been recycled had the market evolved differently,” Alphaliner said.

Port congestion and supply chain crises across the world last year triggered an exponential increase in boxship charter rates. Daily rates have quadrupled since the start of the year, peaking at $110,000 per day in September. By comparison, rates hovered around $6,000 a day in June 2020.

Alphaliner noted that this was a unique opportunity that non-operating owners could not afford to miss, despite the current attractive demolition prices. This year, charter rates are expected to remain high due to a continued shortage of tonnage, a development that should allow boxship owners to take advantage of longer charter periods.

The container ship demolition market is expected to slowly rebound to around 60,000 TEUs per year before rising further in 2023 when a series of new builds finally push older ships out of the market.

Some money services reopen in Tonga, drinking water the priority