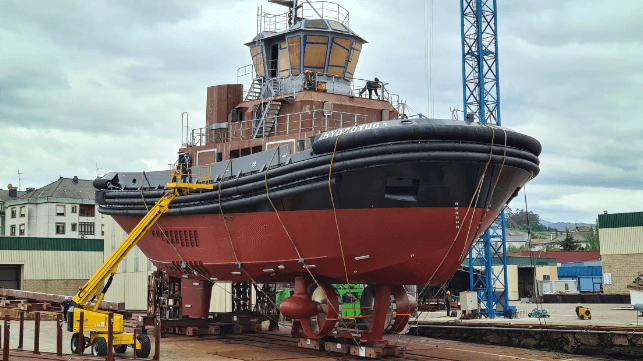 
The Port of Antwerp-Bruges and CMB are preparing to welcome the world’s first hydrogen tug, the Hydrotug.

This one-of-a-kind vessel is a mid-size harbor tug powered by two 2,600 horsepower mid-speed dual-fuel engines, which run on a combination of hydrogen and conventional fuel. The new “BeHydro” engine is a joint venture between the Saverys family’s Maritim Belge (CMB) and engine builder Anglo Belgian Corporation (ABC), and it is available in dual-fuel and hydrogen-only variants. According to the consortium, the bi-fuel version reduces CO2 emissions by 85% in operation and meets IMO Tier III with aftertreatment.

According to the director of operations of the port of Antwerp-Bruges, Rob Smeets, this corresponds particularly well to the vision of the port for its future development: Antwerp-Bruges aims to have green hydrogen by 2028, and is studying the possibility of a hydrogen delivery pipeline between the twin ports and the European hinterland.

“We are delighted that the port of Antwerp-Bruges is the first user of Hydrotug, the largest hydrogen-powered ship in the world. The technology has been approved by Lloyd’s Register and we are ready to enter the global market of 10,000 tugs,” said CMB.TECH CTO Roy Campe. “With this technology, we can significantly improve air quality in ports and bring hydrogen technology to every port around the world.

The Hydrotug was launched on Monday at the Armón shipyards in Navia, Spain. Sea trials are planned for later this year, and the aim is to have the new tug fully operational in the first quarter of 2023.