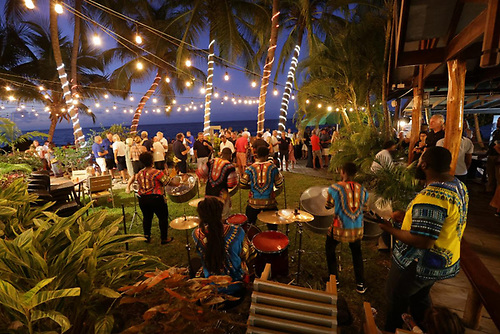 For the sailors of the RCAF + 2021, last Friday’s awards ceremony in St. George’s, Grenada marked the end of their Atlantic cruising adventure that began in Las Palmas de Gran Canaria on the east coast. Atlantic six weeks ago. The Camper and Nicholsons Port Louis Marina docks on the beautiful Caribbean island of Grenada have come to life with arrivals in the last ten days after their ocean crossing. A warm welcome, emotional reunion and rum punch celebrations for each boat rightly marked making landfall after sailing over 2,400nm from Mindelo, Cape Verde on the second stage of their ARC + adventure.

Held in the beautiful setting of the seaside Aquarium restaurant, the ambiance of last night’s awards show reflected a big family celebration, with everyone in the fleet knowing each other so well. 64 of the 66 boats sailing under the ARC + banner made landfall in Granada, with late arrivals from Mindelo expected in the coming days. With a breathtaking view of Magazine Beach facing the Caribbean Sea and a mountainous backdrop, the setting was perfect for the final gathering of nearly 300 participants, including the many children of the fleet. With the sound of a traditional steel pan group providing an unforgettable musical experience to remember their landing in the Caribbean, the children of ARC + played on the sand and their parents shared the stories of their great Atlantic adventure and their memorable rally experience. As the sun began to set, the awards show began to celebrate everyone in this ocean crossing community with awards for sailing performance and contributions to the incredible rallying spirit that took place. is developed over the past six weeks.

The work began with a warm recognition of the teams who have invested so much in the organization of the ARC + 2021 with the arrival of the rally in Granada for the first time. â€œIt was an absolute pleasure for the Grenada Tourism Authority to be involved in this very prestigious ARC + event,â€ said Petra Roach, â€œI want to say a big thank you for choosing Grenada and choosing you as well as ‘in Port Louis Marina because it is a team effort and I am really delighted with the collaboration that we have underway and we really lend our commitment so that in the future we become better and better, because we believe in this event. Zara Tremlett and the staff at Camper & Nicholsons Port Louis Marina have worked tirelessly to welcome the ARC + fleet to the Port Louis Marina and Charlotte Fairhead and Karen Stiell from service partner GTA BroadReach were thanked for their invaluable daily support in delivering the rally.

Of those who visited the stage to collect their prizes, Arya (NOR) received the honors online, followed by the multihull division dominated by Neel 47 BigBird (USA) at corrected time, with the family catamaran Tortuga (DEU) in 2nd place and Scat Cat (GBR) in 3rd. Already back in their native France, the crew of the Outremer 51 Piment Rouge (FRA), the first boat to arrive, sent a special message to the other participants, before the anthem of the celebration ‘Everybody Needs Somebody’ by the Blues. Brothers improved the party atmosphere as the rewards continued.

The Cruising division has been divided into three classes based on handicaps, with Najad 490 Albicilla (NOR) leading the C class, Beneteau First 456 Daisy (DNK) 1st class B and Jeanneau Sun Odyssey 50DS Adelante (NOR) 1st Class A. It was not just the crews who were successful on the competitive side of the rally that received awards; numerous other prizes were awarded for events at sea, the nearest finish and the longest distance traveled, as well as to recognize SSB Net and the duplicate crews who participated. The young participants of ARC + have been a prominent feature of the rally, with 33 children under 16 who have sailed this year, all invited to the stage to receive special certificates and treats from the Granada Tourism Authority.

Many participants took the opportunity to be on stage to say a few words to the assembled group, congratulating their own crew, congratulating all participants for crossing the Atlantic, and thanking the yellow shirts team for their contribution to the success of ARC + 2021 The last participants to be called on stage were the crew who were introduced to the Spirit of ARC +. Kept for the end of the procedure, it is handed over to the crew, or crew member, who, by their extraordinary actions, have demonstrated the spirit of what the Atlantic Rally for Cruisers is – a more cruising cruise. safe and more enjoyable over long distances in the company of others.

The oceans can be testing environments for even the most accomplished sailors. And sometimes things can go wrong. On December 5, a solitary sailboat in transit from Guyana to Martinique was dismasted. The skipper was alone without communication [and no engine]. In his own words, the skipper thought his time had come. However, after 3 days, fortunately for him, an ARC + boat passed nearby. The crew took the time to check out the yacht and see what assistance they could provide. Once communications were established, they relayed the distress to the authorities and began towing this poor lone sailor to port. The actions of the crew arguably saved the life of this captain and he finally made it safely to land in Granada. The 2021 Spirit of ARC + was awarded to the Coco Crew (GBR) – Alfie, Ceylan, Adele and Stuart – in recognition of the support provided by this ARC + crew for 24 hours, and their fellow participants erupted in cheers and d ‘applause.

This year’s rally has been one of the great rewards for those who have delayed their plans and overcome the challenges faced by the pandemic; Unique friendships were formed, special memories were made and the oceanic sailors of ARC + 2021 can all feel rightly proud of their accomplishments in reaching the shores of Pure Granada. â€œI am so grateful to have experienced the family environment that the CRA has provided for us. Not only did they go above and beyond to make sure we were ready for the crossing, but they did a great job of bringing everyone together in the rally by hosting several events and parties, â€said Megan Simonson of Helios (United States). â€œTonight’s awards show was superbly organized. After the celebration prizes, we were able to find other sailors from the RCAF + under the palm trees; the background sound of the crashing waves was also wonderful. It was the perfect way to end the ARC + rally.