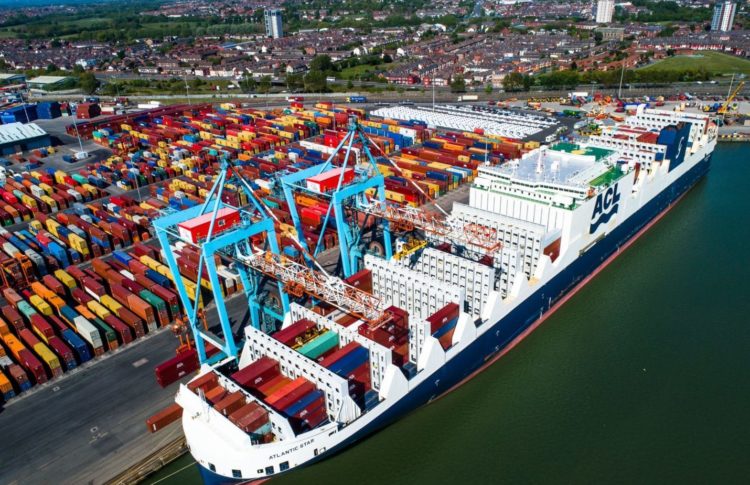 
Shipping giant ACL has expressed concerns to the owner of Liverpool’s port, Peel Ports, after its massive container ships suffered delays arriving and departing from the port. Tony McDonough Reports

Transatlantic shipping giant Atlantic Container Line (ACL) is in talks with the Port of Liverpool and tug operators over delays in the entry and exit of its ships from the Mersey.

Speaking to a webinar hosted by industry body Mersey Maritime, ACL chief executive Anders Ivarsson said its massive container ships aimed to get in and out of port within 24 hours, but it was sometimes extended to 48 or 60 hours.

The two main issues he identified were too few dockworkers at the port to assist with the unloading and loading of containers and not enough tugs to get ships in and out of port safely. Mr Ivarsson said the company was speaking to the owner of Port Peel Ports about the first issue and independent tug operators about the second point.

Liverpool is home to ACL’s hub, employing 150 people. Its Duke Street-based team takes care of the fast and safe transport of all kinds of goods, from consumer goods to helicopters, cars and construction machinery, across the Atlantic.

The company operates from Liverpool, Antwerp, Hamburg and Gothenburg (served by a dedicated feeder) and its giant ships sail to Halifax, New York, Baltimore and Norfolk on the east coast of North America.

Liverpool is the closest to European ports in North America with a journey time across the Atlantic as short as eight days, compared to 14 days from Hamburg.

ACL’s ties with Liverpool date back to 1967. The Cunard Line was one of ACL’s first co-founders and the Port of Liverpool has been serviced weekly since then.

The company is now one of the port’s largest operators and recently signed a 25-year agreement with Peel Ports. Mr Ivarsson said Liverpool had been the “best port in Europe” for ACL and that he wanted that to be the case again.

At the Face-2-Face event, he told members of Mersey Maritime: “What is happening in Liverpool is not great right now. At the Gladstone Locks in Seaforth it is very difficult to do entering and exiting ships.

“We need four tugs to get us in, more often than not on est-bond calls, we only get three in a reasonable service window and therefore we have to omit Liverpool. This is having a negative impact on the container supply in the UK.

Once in port, there are not enough stevedores on site. Liverpool have taken delivery of new cranes and this will significantly increase capacity later this year when they are assembled. It’s fantastic for us, but we need these other issues to be resolved quickly.

“It confuses our customers. We have been registered for 25 years in Liverpool and look forward to supporting UK exporters by getting their goods across the Atlantic quickly. It is a difficult situation that must be resolved. “

“Due to continued growth and demand, we have seen a volume increase of more than 20% and we have reacted quickly and decisively to this in the hope of continuing to grow even more, given the ‘interest in our proven capabilities and location.

“We have been in regular, direct contact with the towing service providers in our area and continue to work closely with them as a number of additional tugs are now on site and the third party issue has been resolved.”

ACL was founded in 1967 by and today belongs to the Italian global shipping company Grimaldi. In 2015/2016, the company replaced its fleet with a new generation of vessels. The five new ships are the Atlantic Star, Atlantic Sail, Atlantic Sea, Atlantic Sky and Atlantic Sun.

Each vessel weighs 45,000 tonnes of “deadweight” and up to 120,000 tonnes fully loaded. Each is 296 meters long with a draft (distance between the waterline and the deepest part of the vessel) is 11.5 meters.

Most major shipping companies will offer either ro-ro ships or container ships. ACL ships offer both. They include 33,800 m² of ro-ro capacity and space for 3,800 containers. They are 10% faster than ACL’s previous fleet and their emissions are 65% lower.

Container ships, especially those operating in the rough waters of the Atlantic, often see containers disappearing at sea. According to the World Shipping Council, nearly 1,400 containers overflow each year. However, Mr. Ivarsson said ACL never lost a single container.

He added: “Despite the winds and the huge waves in the Atlantic, we have never lost a single container overboard. We know that a ship off Hawaii lost 2,000 containers in bad weather. All our containers are well secured. And we have crew members who run the ro-ro cranes every day to make sure everything is safe. “

Mr Ivarsson said that despite the pressures of the global pandemic, ACL has kept its transatlantic service smooth for the past 12 months and he paid tribute to the staff at the company, especially the Liverpool team.

“We have 165 people in Liverpool. We moved to a new office on Duke Street downtown five years ago, ”he said. “We wouldn’t be where we are today without our team and they have adapted quickly over the past 12 months to be able to work remotely.

“At ACL, we have a flat structure. This means that the team that deals with clients has direct lines of communication with senior management. This helps make quick decisions and ensure our customers see their cargo go door to door as quickly and smoothly as possible. “