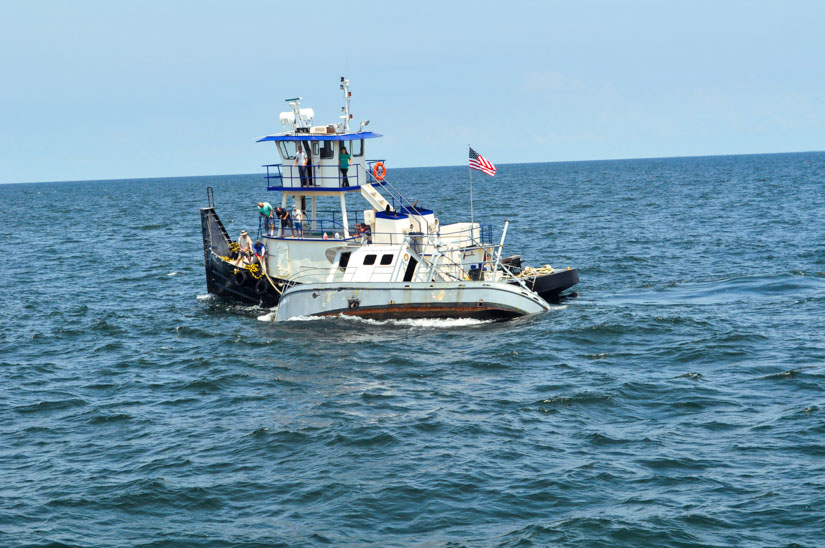 In most cases, the sinking of a ship would be classified as a tragic event. In the case of the R/V research vessel Hermesthe sinking represented a dignified and commemorated end to a beloved ship.

On Wednesday, May 18, the longtime University of Southern Mississippi (USM) marine trawler was officially turned into an artificial reef in the Gulf of Mexico in a special ceremony at sea. A tug pulled R/V Hermes at a designated location called Fishing Haven 2, approximately 15 miles south of Horn Island for the sinking ceremony.

For over 60 years, R/V Hermes had been used in various capacities by USM’s Gulf Coast Research Laboratory (GCRL), located in Ocean Springs, Mississippi. Last year, the GCRL officially retired Hermes and transferred the vessel to Mississippi Gulf Fishing Banks under the agreement that the group would turn it into an artificial reef.

“With 64 years of service to the GCRL, R/V Hermes holds a special place for many people associated with the lab,” said Tiffany McNeese, Director of Vessel Operations at GCRL. “The reef deployment was bittersweet to watch, but it also served as an interesting way to commemorate the ship and its many years of service to the Mississippi Marine Laboratory.”

D/V Hermes was a 38-foot steel-hulled trawler that served as a floating classroom and laboratory, allowing students and scientists access to the Gulf of Mexico. A typical day aboard the vessel included trawling for fish, shrimp and crabs; dolphin watching and field trips to the Mississippi Barrier Islands.

The number of R/V times Hermes embarked from the port is virtually impossible to pin down.

“No solid records exist, but the ship probably made a few thousand trips to the Gulf of Mexico in 64 years,” McNeese said. “In recent years, he was still at sea between 30 and 50 days each summer.”

In preparation for submersion, pre-drilled holes were covered just above the waterline. Once in position, the crew members of the tug boarded Hermes and removed the covered holes. The water was then pumped into Hermes to add weight. The process took about 30 minutes. The ship’s wheel, bell and plate were enshrined ashore.

As she watched the sinking unfold, Dr Jessie Kastler couldn’t help but reminisce about all the exciting excursions she shared aboard the R/V Hermes. Kastler is director of the USM Marine Education Center and oversees the summer field program.

“Watching Hermes gliding through the water made me nostalgic for all the times I took teachers and members of the public to explore the coast and the islands. Many had never been on the water, so getting on the boat took them out of their usual lives for a great adventure. Everyone who has boarded has a story to tell.

Jill M. Hendon, Director, Fisheries Research and Development Center, called R/V Hermes “a resounding source of pride for USM”, noting that the ship not only served as a research platform for the GCRL, but also allowed thousands of students from across the country to have their first experience on the open waters of the Gulf.

“Alumni of the USM Summer Field Program will remember this ship as their opportunity to explore a new realm. We are honored that this vessel provides a unique experience for so many people, and we are excited for her future as a reef in the waters she sailed,” said Hendon. “We look forward to continuing to honor R/V Hermes bringing future students of the Summer Field Program to this reef where we can educate them about the ecosystem it establishes below the surface, as well as tell its story of introducing the Gulf to 64 years of former students.

D/V Hermes was named for State Senator Hermes of Gautier, Mississippi, who helped GCRL Director Aubrey Hopkins secure the ship. The ship came to GCRL in 1955 after being modernized at Kramer Marine in Gulfport.

Joyce M. Shaw, head librarian and professor at GCRL’s Gunter Library, points out that students in the summer field program weren’t the only ones trained during the R/V
Hermes shipments.

“Even our local dolphin population has learned that most of what a trawl does to show students the richness of our marine and estuarine species would be thrown back into the water – so you can always count on a few dolphins to keep up with R/ V Hermes –to the delight of students,” Shaw said.

USM Summer Field Program at GCRL Celebrates 75and birthday this year. The program’s outdoor classroom experiences continue with USM’s R/Vs jim franks and Miss Peetsy Bwhich will continue to introduce students, educators and the public to the scientific wonders of the Gulf of Mexico.