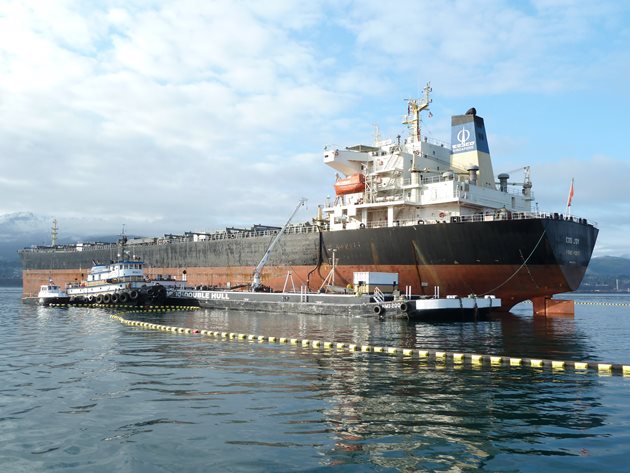 
This blog is a joint publication of the American Waterways Operators (AWO) and Ecology’s Spill Prevention, Preparedness and Response Program.

In the 1980s, several large oil spills prompted the oil shipping industry and state regulators to revise industry practices and spill response regulations. Over the past 30 years, this work has evolved, leading to a historically strong oil spill prevention, preparedness and response capacity and a dramatic reduction in oil spills.

Shortly after the Nestucca barge spill near Grays Harbor in March 1989, the tanker Exxon Valdez spilled over 11 million gallons of crude oil into Prince William Sound in Alaska. Congress responded by enacting the Oil Pollution Act of 1990 (OPA-90), which established a comprehensive framework for oil spill prevention, preparedness and response actions by operators and regulators to eliminate oil spills.

This strong state-industry partnership continues today and is essential to advancing Washington’s zero spill goal, as well as improved international standards, federal regulations, industry innovation and strong partnerships with tribes and stakeholders. Together, we have created a system that is admired and emulated around the world with one of the lowest spill volumes in the country.

The OPA-90 set new safety and construction standards, strengthened federal oversight of the tanker industry, and improved coordination between state and federal authorities. This regulatory coordination, coupled with industry action and increased awareness and engagement of tribes and stakeholders, has led to significant improvements in equipment, navigation technology and safety management. . The law also mandated double hulls for all US-flagged tankers to reduce the risk of an oil spill, authorized the use of the Oil Spill Liability Trust Fund to pay for spill response, and plans emergency zone required in the event of a spill.

In addition to OPA-90, Washington law requires tankers loaded with oil to be escorted by a tug; similar requirements are in place for Canadian waters. Foreign ships visiting US and Canadian ports require licensed marine pilots.

The US towing fleet has also made great strides, including improved safety standards, technological improvements, and industry best practices, such as the widely adopted use of the “Orville Hook” device to recover a lost barge. sea, leading to remarkable results. Over 25 years ago, the U.S. Coast Guard partnered with the professional association of the towing industry – American Waterways Operators (AWO) – to stop spills, prevent injuries and fatalities, and improve practices of security. The partnership has since produced more than 40 cooperative initiatives and facilitated the close collaboration between the Coast Guard and the towing industry which helped pass federal legislation for a new regulatory and inspection regime. for American tugs (46 CFR Subchapter M).

This legislation established important safety standards for the national maritime industry, many of which were already in place through the Responsible Carrier Program (RCP), a safety management system developed by AWO and required to become a member of the ‘association. The RCP and the legislation require inspections and audits for ships and operations ashore.

Ship design standards and operational requirements have evolved over the years, creating a highly sophisticated and safer US-flagged fleet. The legislation has gone further by requiring redundancies of systems for propulsion and steering, in addition to alarm systems, to ensure that mariners have situational awareness of all operations during their watch.

In 1999, Washington established the Emergency Rescue Tug at Neah Bay to assist ships in distress during the winter months. In 2008, the Legislature committed $ 3.6 million to fund a full-time, year-round tugboat. In 2010, he passed a law requiring ships using the waterways to pay for the tug program, with the Marine Exchange of Puget Sound providing administrative services.

Internationally, the Joint Canada-U.S. Marine Pollution Contingency Plan describes how the United States and Canada will work together and pool their knowledge and resources to prevent and respond to oil spills. in international boundary waters. The United States Coast Guard, Canadian Coast Guard, Ecology and the British Columbia Ministry of Environment conduct regular exercises to coordinate prevention, preparedness and response activities.

In addition, the United States Coast Guard and Transport Canada administer the Port State Control Program, an international protocol designed to ensure that ships comply with all applicable international maritime safety agreements. This program aims to identify substandard or substandard vessels and prevent them from using regional ports.

Of course, the least damaging and inexpensive spill to clean up is the one that doesn’t happen. With that in mind, the state, along with industry and other tribal stakeholders and partners, continue to take preventative action to ensure that a spill like Nestucca never happens again in our waters.

In 2018, the legislature adopted the Strengthening of the Oil Transport Safety Law. In response to a recent increase in the transport of oils that sink in water, parts of this act direct the ecology to pursue new requirements for non-floating oils. Intervention and preparedness capacities must also increase to face this new danger. Ecology is also developing an oil spill risk model that the legislature requested to be used in two initial analysis projects: an assessment of tug escorts for certain types of tankers and an assessment of risk reductions. hydrocarbons that could be supplied by an emergency response. tug for Haro Strait, Boundary Pass and Rosario Strait.

The risk of a major oil spill is lower today than in the past, but the risk is never zero. Through a shared commitment to monitoring, vigilance and continuous improvement, Ecology, partner agencies, tribes, industry, response organizations, environmental groups and stakeholders work together to prevent spills, and prepare and respond if one occurs. Today Washington has one of the lowest oil spill rates in the country, and the hard work and strength of our partnerships help limit the chances that we will again face a major spill in the North. Where is.

A brief history of ocean research at the Lamont-Doherty terrestrial observatory, past and present